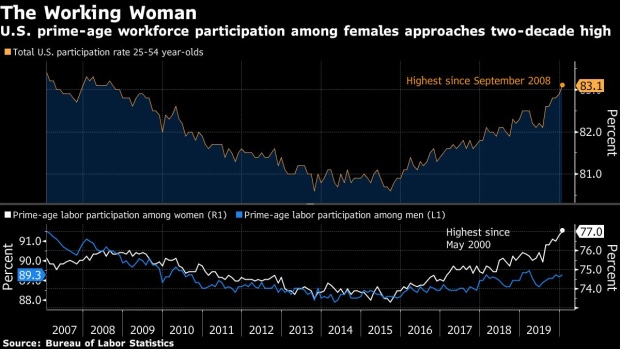 (Bloomberg) -- The share of Americans in the labor force is the highest in nearly seven years -- and the trend is led by younger women.

The overall U.S. labor-force participation rate climbed to 63.4% in January, the biggest share since June 2013. Drilling into the latest data released Friday, the gain reflects the highest participation in almost two decades among prime-age women who are 25 to 54, called that because the years are key for career-building.

Among women, the fastest increases were among millennials and younger Gen Xers, with the biggest gains for those in their early 20s and 30s, and among females aged 35 to 44 -- a full 1.4-point jump last year. Meanwhile, the participation rate of those age 45 to 54 retreated in January for a second month.

What’s more, 2.7 million women who weren’t in the labor force before January, entered and found a job. That was more than the almost 2.2 million men who went from out of the labor force to employed, underscoring sustained demand for workers.

Men in their prime still participate at a higher rate -- about nine out of 10 compared with eight out of 10 women. But the prime-age male participation rate has eased from a high last year of 89.5% in March and remains below levels in prior decades.

There are plenty of theories for this, ranging from an opioid epidemic that disproportionately affects men, to a manufacturing jobs decline in recent decades. There’s also employer demand for those with a college degree, as college-educated women outnumber men in the U.S.