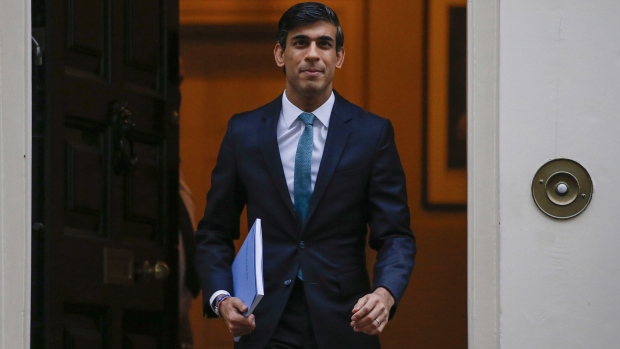 Rishi Sunak, U.K. chancellor of the exchequer, departs Downing Street ahead of the presentation of spending plans at Parliament, in London, U.K., on Wednesday, Nov. 25, 2020. Sunak will likely perform a balancing act between supporting the recovery in the near term while also signaling there's a repair job to be done on the public finances in the medium term. , Bloomberg

U.K. Chancellor Rishi Sunak is under mounting pressure to support households through the cost of living crisis by cancelling a planned 12 billion pound ($16 billion) payroll tax rise from April.

Ministers are seeking to make good commitments to help the National Health Service clear a treatment backlog and fix a crisis in care for the elderly “once and for all” without adding to the huge debts built up during the pandemic.

The government for now plans to go ahead with the 1.25 percentage point increase in national insurance contributions. Prime Minister Boris Johnson is reported to be “wobbling” as an increasing number of Conservative lawmakers revolt against a policy that puts the U.K. on track for the highest tax burden for over 70 years.

Following are the options Sunak has to consider in handling the issue:

Julian Jessop, a fellow at the Institute for Economic Affairs, points out that the budget deficit is set to come in 13 billion pounds below forecasts in the current fiscal year, thanks to stronger growth. That “provides the fiscal room to ditch the hike” for one year. That option would ease the squeeze on households without breaking the pledge to fund social care in the long-term or damaging the public finances, he said. A suspension would be consistent with Treasury logic, he argued, as the 2022 increase was to cover one-off costs of the pandemic. Only from 2023 is the money linked to social care reform.

Conservative lawmaker Robert Halfon wants to scrap the NICs rise as part of “a cost of living package” but without increasing borrowing. Instead, he suggested a windfall tax on North Sea oil and natural gas producers, which are benefitting from higher prices, and an increase in capital gains tax on the wealthy.

His proposals echo the opposition Labour Party, which has proposed a one-off 10% levy on the profits of North Sea producers to raise 1.2 billion pounds. Treasury officials dislike windfall charges on the grounds that unpredictable tax rules deter foreign investment.

Work by the London School of Economics and Warwick University has shown that equalizing capital gains and income tax rates would raise as much as 16 billion pounds, another policy Labour is believed to be looking at.

Many Conservatives want to restore the party’s reputation for low taxes and are horrified by being compared with Clement Attlee’s Labour government in the early 1950s. Yet they also want to keep the health care reforms, which will cost 12 billion pounds a year from 2023.

In principle, Sunak could abolish the tax rise, cover care reform legislation and still meet his fiscal rules to have debt falling as a share of GDP in three years. Oxford Economics expects new forecasts from the Office for Budget Responsibility in March to give him permanent scope to increase spending by about 12 billion pounds a year. That’s due to an improved long-term growth outlook. Scrapping the tax may also generate some growth by supporting consumer demand.

A borrowing binge could not be more poorly timed. The national debt is the highest since 1963, and rising inflation and interest rates are driving up state borrowing costs, which have already increased by 21 billion pounds in the first nine months of the current financial year.

A House of Lords amendment to the Health and Care Bill calls for a “sovereign health fund … to invest in a portfolio of data-driven health-care assets and enterprises for the purpose of generating long-term income for health and care purposes.”

The idea is both to invest in life science companies through state institutions like the British Business Bank and secure intellectual property rights in exchange for access to public health-care data and services. The portfolio would deliver shareholder returns and dividends.

Though not a short-term solution, it could create a new income stream to cover future NHS costs. The government invested over 1 billion pounds directly in start-ups in the pandemic, and has committed another 350 million pounds to life sciences companies.

Conservative MP John Penrose backs plans for a sovereign wealth fund. The bill is meant to pass by April.