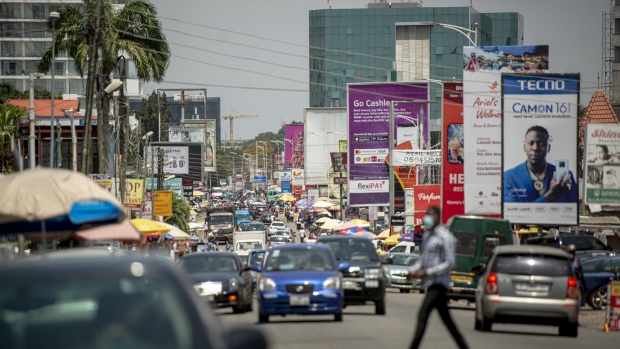 (Bloomberg) -- Ghana slashed its plan to borrow as much as $750 million from international banks because of surging borrowing costs, according to a finance ministry official with knowledge of the matter, and will also tap the International Monetary Fund to bolster its finances.

The West African nation will borrow $250 million from banks at an interest rate of about 8.4% to fund budget needs such as roads, railways, energy and health.

The five-year syndicated loan facility brokered by lead arrangers Standard Bank Group Ltd., Standard Chartered Plc and FirstRand Ltd.’s Rand Merchant Bank Ltd. will be repaid at the Federal Reserve’s secured overnight financing rate plus 6.85% per annum, according to a copy of the terms sent to parliament by the finance ministry and seen by Bloomberg. The SOFR stood at 1.5% as of the close on June 30.

A finance ministry spokeswoman declined to immediately comment when reached by phone.

After failing to find cheaper sources of funding, President Nana Akufo-Addo’s government on Friday said Africa’s second-largest gold and cocoa producer will seek a bailout from the IMF. The nation’s dollar reserves dropped to $8.3 billion at the end of April from $9.7 billion at the end of last year, according to the central bank. The country’s public debt increased to 78% of gross domestic product at the end of March.

The rate on the $250 million loan is far lower than the 23.27% yield on Ghana’s dollar bond maturing in five years, a level that locks West Africa’s second-biggest economy out of the Eurobond market. Ghana lost access this year due to higher debt and budget deficit levels, partly caused by the impact of the coronavirus pandemic.

Stitched into the loan terms is a $50 million comprehensive insurance cover from the Africa Trade Insurance Agency, that will include all principal together with interest. That will pay out the banks in the event of a default.

While Ghana aims to cut its budget shortfall to 7.4% of gross domestic product this year from an estimated 12.1% of GDP in 2021, that is becoming more difficult after price pressures emanating from Russia’s invasion of Ukraine started to take a toll on economic activity.

Inflation quickened to a more than 18-year high of 27.6% in May. The economy, which grew 5.4% last year, expanded less than expected in the first three months at 3.3%.