Number of Canadians who can't pay their debts surges

A surge in the number of people who can’t pay their debts is raising eyebrows in Canada.

Some 11,935 consumers filed for insolvency in September, according to the Office of the Superintendent of Bankruptcy — a 19-per-cent increase from a year earlier and the biggest annual gain since 2009. So far in 2019, there have been 102,023 consumer insolvencies, the second-most for the first nine months of a year in records dating back to 1987.

While the increases are coming from low levels, the trend is a worrying development that suggests cracks are starting to appear in Canada’s household debt landscape, at least for the most extended individuals. That would be all the more concerning, since it could foreshadow pressure on the country’s financial system. And it’s a bit of a puzzle, given the economic backdrop has been positive, including an unemployment rate that’s dropped to historically low levels. 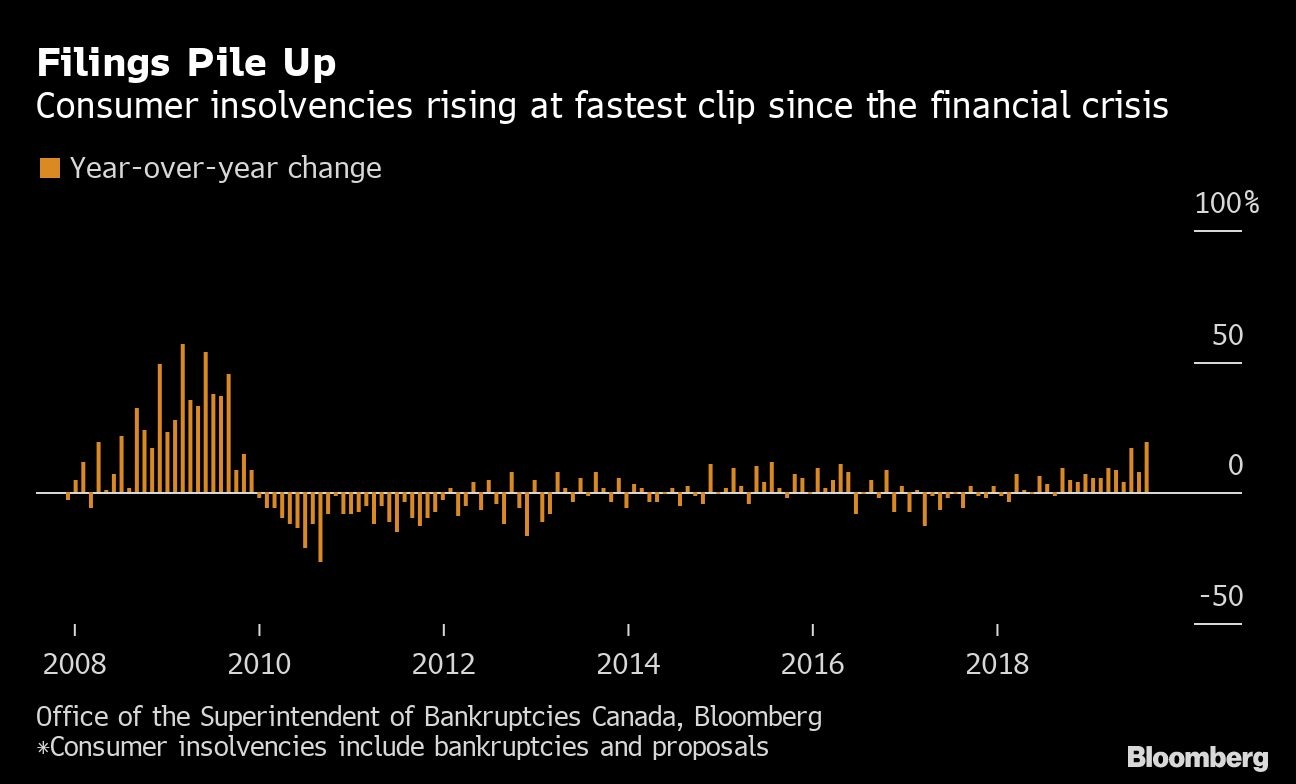 “Normally there’s a story you can tell, like there’s some underlying weakness that shows up with a bit of a lag in personal bankruptcies and insolvencies,” said Stephen Gordon, an economics professor at Université Laval in Quebec City. “It’s just hard to see that now. It’s perplexing.”

Insolvencies are accelerating at a pace that’s been associated with periods of distress: the start of the 2008-09 financial crisis, immediately before the 1990-92 recession, and during the period of pronounced economic weakness in 1995-96 that was tied to the Mexican peso crisis.

The significance of the latest data is open to debate. For one thing, the insolvency numbers are at odds with other indicators that show a more benign environment for household debt. For instance, mortgage arrears were 0.23 per cent nationally at the end of July, close to the lowest they’ve ever been, and delinquency rates on non-mortgage debt remain subdued.

In addition, a strong labor market, rising wages, interest rates that are lower than they were at the start of the year and a recovery in home prices all suggest borrowers should have more breathing room, not less.

It’s “hard to square” the jump in insolvencies with that backdrop, according to David Tulk, a Toronto-based portfolio manager at Fidelity Investments. “Maybe it isn’t a trend that would represent the average borrower, but is instead catching the fringe that have over-extended themselves,” he said in an email.

That’s not to say he’s downplaying the insolvency numbers, but rather they confirm his prior concerns about Canadian households. “What I worry about more is that households use the retrenchment in rates to add even more leverage, and then we get an employment shock,” he said.

Brett House is more sanguine. While the latest surge in filings is “a bit concerning” given low unemployment and low interest rates, the deputy chief economist at Bank of Nova Scotia in Toronto said “there are a number of important factors that temper the implications of the September print.”

For one thing, the share of insolvencies to the total amount of household debt is falling. There were 5.3 filings for every $1 billion in total household debt as of September, versus 17.8 in 1997.

Adjusting for population growth, the numbers also looks less dramatic. For instance, some 0.06 per cent of the Canadian workforce filed for insolvency, based on September numbers, versus 0.09 per cent a decade ago — though the rate has moved higher over the past 20 years.

Tulk said he won’t read too much into one month’s worth of insolvency data. But if next month’s print shows a further increase and if things look shaky elsewhere, “I will be sufficiently nervy,” he said.