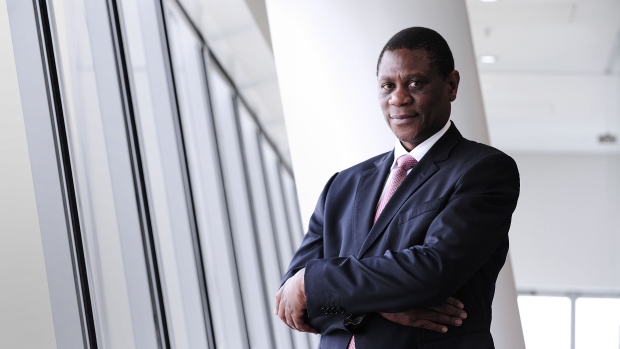 A customer shops inside a new Pick n Pay Stores Ltd. QualiSave supermarket in Cape Town, South Africa, on Monday, Aug. 15, 2022. Pick n Pay in May said it was revamping stores, targeting 3 billion rand ($181 million) of savings and seeking to be clearer in how it approached different target markets. Photographer: Dwayne Senior/Bloomberg , Bloomberg

A senior South African ruling party official who has his sights set on becoming the nation’s next deputy president, and maybe even the top job, says he has a plan to end government prevaricating and fix the struggling economy.

President Cyril Ramaphosa looked be a shoo-in to win a second term as leader of the African National Congress later this month and president in 2024, but is now facing pressure to quit after a panel headed by a former chief justice found there may be grounds to impeach him. There isn’t an obvious successor if he does go, but one name doing the rounds is that of Paul Mashatile, the party’s treasurer, who got the most nominations for its No. 2 post.

Mashatile made no secret of his political ambitions in a Nov. 29 interview at Bloomberg’s Johannesburg offices the day before the panel released its report. He began his response to one question by saying: “If I become ANC president...,” before laughing and correcting himself.

Mashatile bills himself as a can-do, investor-friendly politician. He wants the government to implement reforms needed to stimulate economic growth, including turning around state power utility Eskom Holdings SOC Ltd., which has subjected the nation to rolling blackouts since 2008.

“We know what is wrong with Eskom so let’s fix it!” he said. “If we have to take on debt then let us do that. If we have to bring people with expertise for the various power stations, let’s do it, including, by the way, bringing in people from abroad if we need more skills to go in there and assist.”

The need for a turnaround in South Africa is pressing, with the unemployment rate at almost 33% and public anger rife over rampant poverty, poor government services and ongoing corruption. While Ramaphosa has strived to attract investment and established a unit in his office to make it easier for businesses to operate and create jobs, his administration has faced criticism for failing to sufficiently follow through.

“I have met many private-sector people who are saying we are prepared to come in, but the doors are closed,” Mashatile said. The option of getting private investors to partner with the government in running state companies “must be encouraged,” he said.

Under ANC rules, its leader will also be its presidential candidate in 2024 elections. It remains unclear whether Ramaphosa, who was accused of failing to properly report a robbery at his game farm but denies doing any wrongdoing, will vacate his post and the ANC is still deliberating about his future. One other possible successor is Zweli Mkhize, who quit as health minister last year after he was implicated in a Covid-19 tender scandal. He denies wrongdoing.

Mashatile declined to comment on whether he’ll consider running for ANC president at its elective conference, which gets under way on Dec. 16. His lobbyists say they are listening to calls for him to stand and there’s no rush to take a decision. If he bides his time and wins the deputy-leader post, he’d be in pole position to take over the top job in 2027.

Colin Coleman, the former head of Goldman Sachs in sub-Saharan Africa, described Mashatile as “very competent” and he wouldn’t be concerned if he were to become president.

The 61-year-old Mashatile was born in a township on the outskirts of Pretoria, the capital, and his family battled to afford clothes, according to one of his childhood acquaintances.

He later moved to Johannesburg’s Alexandra township, and became the so-called don of a group known as the Alex Mafia, which fought against White-minority rule during the apartheid era. He received a rapturous reception when he returned to the area this week to address a rally in a packed community hall.

“The ANC will be in safe hands” with Mashatile in its top leadership, Obed Bapela, a member of the party’s National Executive Committee, said at the gathering.

After apartheid ended, Mashatile went into government, holding several senior posts in the central Gauteng province’s government, including that of premier. He was appointed national arts and culture minister in 2010 by then-President Jacob Zuma, a post he held for five years before returning to Gauteng to oversee its housing department.

Mashatile was a popular leader in Gauteng and retains strong support there, said Melanie Verwoerd, an independent political analyst and former ANC lawmaker.

Ramaphosa succeeded Zuma as ANC leader in December 2017 and Mashatile was elected the party’s treasurer-general. Zuma, who had been immersed in a succession of corruption scandals, was forced to step down as the nation’s president two months later and was replaced by Ramaphosa, with Mashatile leading the charge for his removal.

Mashatile became the ANC’s acting secretary-general last year when Ace Magashule was suspended after being charged with graft, and then assumed the duties of its deputy secretary-general this year after Jessie Duarte fell ill and later died -- giving him a visibility that has bolstered his standing in the party. His efforts to turn the ANC’s shaky finances around faltered, however, and its staff went on strike after it failed to pay their salaries.

While Mashatile has a limited track record in national government, he is a pragmatic politician and a proponent of market-friendly reforms, said Lukhanyo Vangqa, an independent political analyst.

“Compared to Ramaphosa, his asset would probably be that he is not reluctant to pull the trigger,” said Vangqa, who expects the president to quit and Mashatile to take over his job after the ANC conference. “He will act on things he pronounces.”

--With assistance from Paul Vecchiatto.