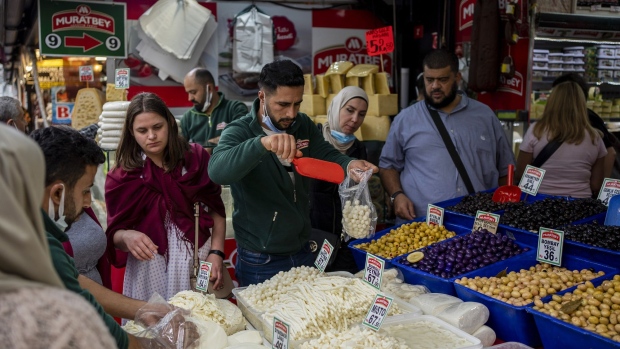 A vendor serves a customer at a fresh produce stall inside the spice bazaar in the Eminonu district of Istanbul, Turkey, on Friday, Oct. 15, 2021. Turkish President Recep Tayyip Erdogan fired monetary policy makers wary of cutting interest rates further, driving the lira to record lows against the dollar with his midnight decree. , Bloomberg

(Bloomberg) -- With prices at Turkish grocery chains rising almost on a daily basis, consumers and supermarket workers are venting their anger on social media, as opponents of President Recep Tayyip Erdogan grasp an opportunity to further dent his popularity.

Inflation climbed to an annual 20.7% in November, with food prices rising 27.1% on average. The price tags on many basic goods suggest the situation is even worse in reality; videos of supermarket employees racing to change labels have gone viral online.

“We can’t even keep up with the price of tags themselves,” smiles a man in a Twitter video, saying he works in a grocery store. “A roll of stickers used to be sold for 10 lira. Now it’s 30.” In a Twitter chain that’s gone viral, users post screen shots of product prices before and after the latest bout of inflation. The posts show that from baby food to mobile phones, prices in many cases are double what they were last year.

The rise in prices has been largely driven by a record slide in the lira since the central bank, under pressure from Erdogan, embarked in September on a series of hefty interest rate cuts. Erdogan has defended the push for lower borrowing costs, saying it’s part of a strategy to boost export-led growth, create jobs and reduce the economy’s dependence on fickle foreign inflows.

So far, however, his so-called “new model” has resulted in falling living standards for many Turkish households and a decline in support for the government with 2023 elections on the horizon.

Erdogan’s job approval is hovering around 39%, near record low levels last seen in 2015, according to a November survey by pollster Metropoll. A majority of opinion polls conducted in recent months show the opposition Nation Alliance would beat the Erdogan-led coalition comfortably in an election.

The ruling party and government officials aren’t making life easier for the president. Last month, AK Party parliament whip Cahit Ozkan compared the lira with the Japanese yen, saying the latter is also weakening but the Japanese aren’t making a fuss about it. Speaking in a televised debate, Muhammet Kaynar, another AKP official, questioned whether people were really forming queues to buy cheap bread or just “posing” to get their photos taken.

In an apparent effort to deflect voter anger, Erdogan has blamed price increases on hoarders. “There are those who hoard goods in every area, even in cars,” he said earlier this week. Erdogan said he’d instructed the trade minister to increase fines imposed on companies that hold goods back from sale to benefit from higher prices in the future.

The plunge in living standards has prompted some of Erdogan’s critics to seize the initiative.

Kemal Kilicdaroglu, leader of the Republican People’s Party, recently wrote a public letter to chief executives of major supermarket chains, asking them to refrain from raising prices on 10 basic items through the winter. He said the main opposition parties would make up for their losses when they come to power.

“Society is focused on earning the day’s bread and surviving,” said Veysel Ulusoy, an economist who also leads an independent group that publishes an alternative to official inflation data. “A wider part of communities are in poverty now, according to the very own criteria of the state statistics agency.”