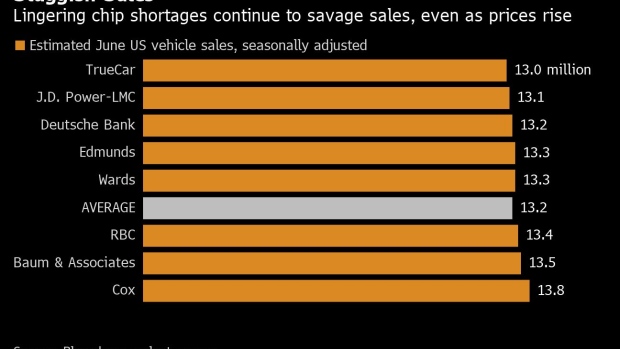 A customer refuels at a Chevron gas station in Menlo Park, California, US, on Tuesday, May 24, 2022. The price of a regular gallon of gas is more than $4 in all 50 states for the first time, while in California, drivers are paying an average $6.07 per gallon to fill up their car. , Bloomberg

(Bloomberg) -- When Jeannine Anckaitis started shopping for a car for her daughter Amanda’s 16th birthday, she was hit with waves of sticker shock.

First her hopes of spending about $18,000 on a used car were dashed when she discovered it would cost thousands more due to scant supplies on lots. At new car dealers, too, she learned she would have to pay thousands over the manufacturer’s suggested retail price.

“We didn’t pick the color, we didn’t pick the options,” said Anckaitis, who runs a nonprofit in suburban Philadelphia. “It’s shocking that we are willing to pay a thousand over sticker. But we’ve already dragged our feet for so many months and it doesn’t seem like it’s getting better.”

Runaway car prices have padded the profits of automakers and their dealers, allowing them to thrive even as a lingering semiconductor shortage continues to weigh on sales, which analysts forecast will be down more than 20% on average in the second quarter compared with a year ago.

Many of the largest car companies, including General Motors Co. and Toyota Motor Corp., will report quarterly US sales numbers on Friday.

Car buyers, buffeted by $5 gas and the highest inflation rate in 40 years, increasingly are finding it hard to stomach the sticker shock as the average price of a new vehicle approaches $47,000, according to automotive researcher Edmunds.com. That’s up more than 13% from this time last year and a jump of 35% from five years ago, when a new set of wheels went for $34,651 on average.

“Because prices are high and everything else is so expensive, we’re inevitably going to see demand start to soften,” said Jessica Caldwell, Edmunds executive director of insights. “There is less consumer traffic than normal and inquiries from people interested in buying cars are lower.”

A lack of inventory due to the chip shortage has been a major reason for the cratering car market this year. The annual selling rate is expected to decline to 13.2 million vehicles in June from 15.4 million a year earlier, according to the average forecast of eight market researchers. Prior to the pandemic, annual US auto sales topped 17 million vehicles for five consecutive years from 2015 to 2019.

Affordability is becoming another road block to sales. The average monthly payment on a new car loan is almost $700, up 13% from a year ago, researcher J.D. Power reports. That could lead to fewer sales for automakers even after inventories return to normal.

“The new vehicle market is shrinking the pool of households who can buy vehicles,” said Jonathan Smoke, chief economist for Cox Automotive. “It’s permanently changing the retail landscape and what it means to be an entry level buyer.”

Among automakers, the short supply of cars has gone from vice to virtue in a cooling economy, as executives see it as salvation for their bottom lines.

“While the economy may slow, the imbalance is so great that if you can build it, it will sell,” Bob Carter, Toyota’s top US sales executive, said in an interview. “I don’t see a problem until 2023, when the supply chain catches up.”

Over at Ford Motor Co., the finance staff is planning for everything from a mild to a severe recession, Chief Financial Officer John Lawler told analysts at the Deutsche Bank Auto Conference on June 15. But with a paucity of models and the consumer demand that has built up during the pandemic, Ford sees high prices holding up -- and propping up profits.

“It’s a completely different environment heading into what could be a potential recession than anything I’ve seen,” said Lawler, a 32-year veteran at Ford. “This is going to unfold for us as a company and for the industry a bit differently than it has in the past.”

But rising interest rates could give pause to car buyers who have seemed nonplussed by rising prices. After the Fed hiked rates the most in 28 years on June 15, the average percentage rate on car loan rose to 5.1%, the highest since the start of the pandemic, according to Edmunds. The days of the 0% financing deals that fueled auto sales in the last decade appear to be in the rearview mirror.

“Even though prices are rising, consumers are still in the mindset of, ‘Can I find one?’ not ‘Where can I get the best deal?’,” said Mark Wakefield, head of the automotive practice at consultant AlixPartners. “The biggest negative is really the loan rate, where that’s been increasing sharply in 2022 and is expected to really crimp into affordability.”

It may take some time for the impact of the emerging affordability crisis to take hold, Wakefield said. But if prices and interest rates continue on their upward trajectory, it’s inevitable.

More prospective buyers may decide to wait for better pricing and selection, said Smoke, the Cox economist. “The spillover of the tight supply leading to record high prices, record low incentives, and now compounded by higher interest rates, is reducing some of that incremental demand.”

Automakers that are chasing ever higher prices and wealthier customers do so at their peril, said Jose Munoz, global chief operating officer of Hyundai Motor Co., the company building the Elantra sedan Anckaitis is purchasing for her daughter.

“It’s easy to take advantage of the wave of the trends to compete in the high end, but you need to be always mindful of the cost,” Munoz said in an interview. “If you’re not able to be affordable, then you are not competitive.”