Rising interest rates are likely going to widen wealth inequality in Canada, as housing affordability hits its worst level in decades, according to Beata Caranci, senior vice-president and chief economist at TD Bank.

In a report released Wednesday, Caranci said there are several factors that affect wealth inequality in Canada but “housing is the single, most important element of the household balance sheet.”

She added that it’s getting even more challenging for low-income Canadians to get into the housing market, as interest rates continue to rise.

“The recent spike in interest rates has lowered home prices and the down payment thresholds, but it has ultimately worsened affordability with higher debt service costs,” Caranci said.

“Each percentage point increase in interest rates from current levels will need to be accompanied by a roughly 10 per cent decline in (home) prices to keep mortgage payments the same.”

The Bank of Canada has hiked interest rates four times in a row now, with the benchmark overnight rate currently sitting at 3.25 per cent.

Officials expect they will continue raising rates in the months ahead.

“Given the outlook for inflation, governing council still judges that the policy interest rate will need to rise further,” officials said in the statement.

Despite property prices falling in markets like Toronto and Vancouver, the report found the average home price is “still 80 per cent higher than 10 years prior and has significantly outpaced employee compensation that’s clocking in at 47 per cent.”

Using the Greater Toronto Area (GTA) as an example, TD estimated the median household income was $91,786 in 2021.

Caranci said the average GTA household is having to “dedicate 56 per cent of their pre-tax monthly income to mortgage payments to afford the average priced home.” 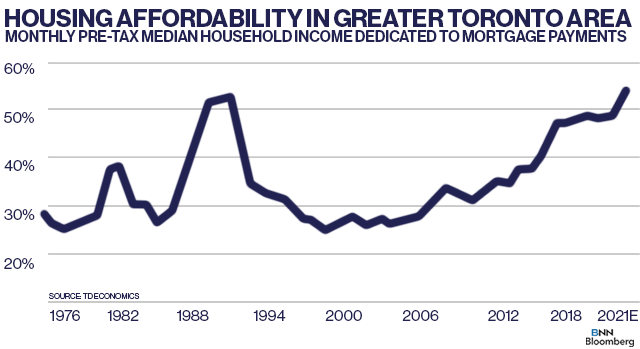 The program is expected to launch sometime next year and it’s aimed at helping first-time homebuyers jump into Canada’s pricey housing market.

However, Caranci said this program doesn’t change the “calculus in either the supply-demand mismatch, nor the gap in home buying potential between those with higher incomes and pre-existing housing or family wealth, versus those without those advantages.”

She added that past attempts to help lower-income households to increase their savings with the “Working Income Tax Benefit (WITB), RESPs and Canada Learning Bonds, RRSPs and TFSAs”, have had the opposite effect of addressing Canada’s housing affordability issue. 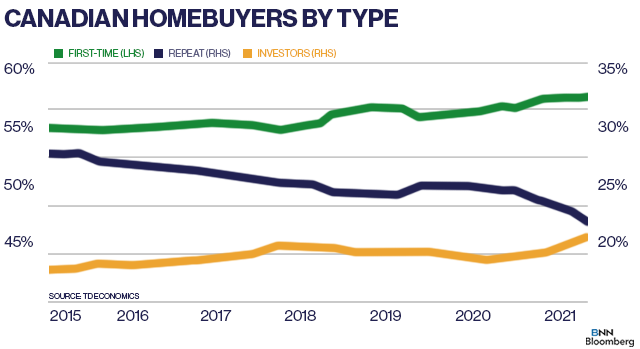 Caranci suggested that policymakers should focus their efforts on “improving outcomes for long-term renters.”

“This can be achieved either by re-assessing the current milieu of housing subsidies, or by providing targeted, equal-value supports for renters to allow the opportunity to save and keep up, rather than forcing Canadians to leverage to greater lengths in order to ‘get in,’” she said.