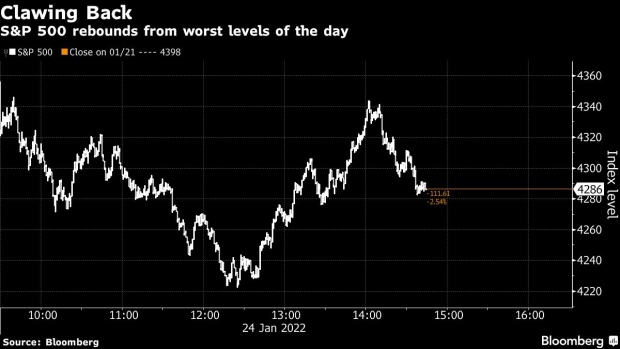 (Bloomberg) -- A strong showing at the Treasury Department’s latest bond sale is helping stem the bleeding in the stock market.

Treasury’s $54 billion auction of two-year notes -- the tenor most sensitive to Federal Reserve rate-hike expectations -- attracted the strongest demand since February 2020, according to data compiled by Bloomberg. The S&P 500, embroiled in its worst selloff since September 2020, nearly halved its decline in the aftermath.

The robust bond bid suggests market bets on U.S. rate lift-off has become a tad too aggressive of late, according to Sameer Samana at the Wells Fargo Investment Institute.

“Strong auction demand would indicate that good demand for Treasuries will blunt the rise, in terms of rate of change,” said Samana, the firm’s senior global market strategist. “That probably does help because one of the things the market needs to come to terms with is that yields aren’t going up in a straight line.”

Nearly four interest-rate hikes in 2022 have been priced into markets in the past few weeks, sending Treasury yields soaring to pre-pandemic highs and rattling richly priced growth shares such as technology firms.

Even with the afternoon bump in New York trading, the S&P 500 nursed losses of around 1.6%, bringing year-to-date declines to nearly 10%.