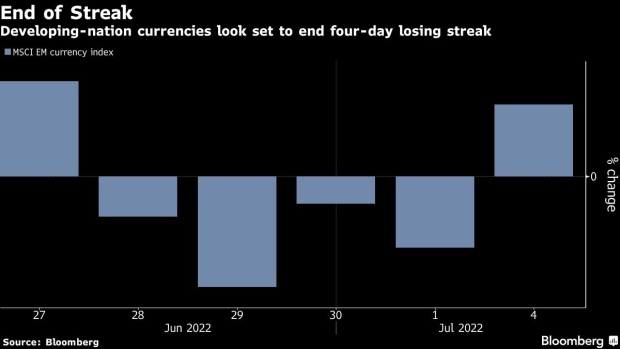 (Bloomberg) -- Commodity and risk currencies rallied on Monday as investors wagered that global trade will improve if the US decides to ease some Chinese tariffs.

MSCI’s index for emerging market currencies added 0.2%, the first increase in five days. The move was led by South Africa’s rand, which strengthened 0.6% against the dollar. The offshore yuan advanced 0.1%, while the Australian and New Zealand dollar touched session highs.

The Wall Street Journal reported on Monday that President Joe Biden may announce a decision to lift some tariffs on Chinese imports as the administration looks for ways to ease inflation. Biden’s decision may affect consumer goods and create a framework for importers to request tariff waivers, the report said, citing people familiar with the matter.

Commodity-linked and risk currencies have been pummeled by concerns over a economic slowdown and increasing trade barriers. Both the rand and Aussie are still trading near the lowest levels since 2020.

Some strategists cautioned that the moves may be unsustainable, given the trajectory of tighter global monetary policy.

The rally “should not run too far,” said Adam Cole, chief currency strategist at RBC Capital Markets. “This is only a small offset to those factors.”