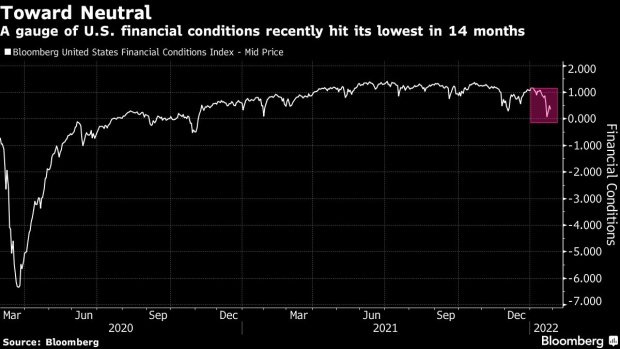 (Bloomberg) -- The Federal Reserve’s intended rate-hike path could be upset if financial conditions tighten too quickly, according to a former official of the U.S. central bank.

Fed Chair Jerome Powell endorsed a rate liftoff in March and opened the door to more frequent and potentially larger hikes than expected to cool inflation. That could cause stocks in particular to sink, and prompt policy makers to step in to loosen policy, in what’s often referred to as the “Fed put.”

While equity markets are “nowhere near the strike price for a Fed put,” the central bank’s plans could be stymied if incoming information suggests underlying economic momentum isn’t as strong as it currently appears, said Evercore ISI strategist Krishna Guha, a former official at the Federal Reserve Bank of New York.

“We will ponder whether we should move our base case from four hikes plus quantitative tightening this year to five +QT” given Powell’s comments, Guha wrote in a note Wednesday. “The huge caveat is whether anything along these lines could be delivered without a blow-up in financial conditions that short-circuits the process.”

Markets are adjusting after Powell said policy must be “nimble” to confront risks including inflation, with the 10-year Treasury yield jumping nearly 10 basis points on Wednesday and the Cboe Volatility Index or VIX closing at 31.96, its highest level in a year. That comes as the Bloomberg U.S. Financial Conditions Index dropped on Monday to its lowest level since November 2020 -- though it remained in positive territory, indicating accommodative conditions.

Even if macro data support a faster return to a more normal policy setting and Fed action at consecutive meetings, the pace of such transition could “detonate” a significant tightening in financial conditions across credit and equity, Guha noted. That could result in “the Fed seeing enough of a downside risk to growth to slow down again,” he wrote.