The world’s workers are reeling from the initial shock of the coronavirus recession, with job losses and welfare claims around the globe already running into the millions this week.

With International Monetary Fund Managing Director Kristalina Georgieva warning of a “crisis like no other,” the cuts from Austria to the U.S. reflect the deepest peacetime recession since the 1930s as economies are frozen to beat the pandemic.

“We see unemployment rates in the U.S. and Europe getting up well up into the teens,” Peter Hooper, global head of economic research at Deutsche Bank AG, told Bloomberg Television. “Given the pain that we see near-term in the U.S. and Europe, this is unprecedented since the Great Depression, in terms of magnitudes.” 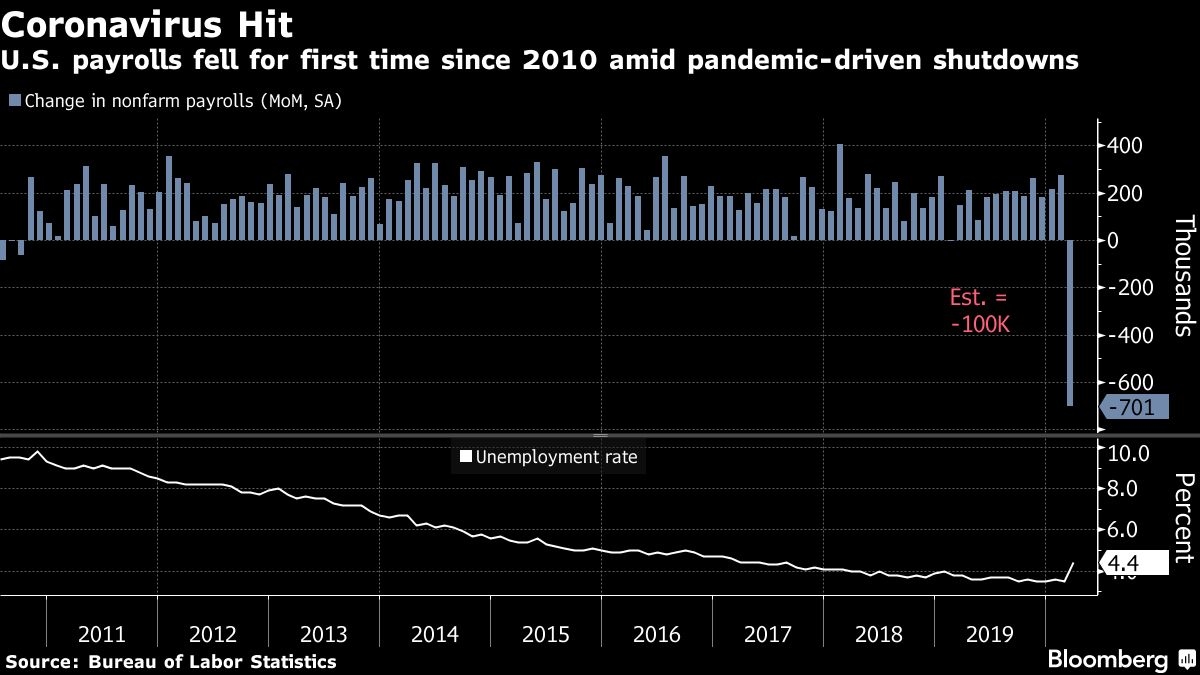 Rising unemployment will intensify pressure on governments and central banks to speed delivery of programs to either compensate workers who are made redundant, or try to persuade employers to hoard staff until the virus fades.

Failure would risk an even deeper recession or weak recovery that would require policy makers to consider yet more stimulus on top of that already deployed. The International Labor Organization last month warned almost 25 million jobs will be lost if the virus isn’t controlled.

At JPMorgan Chase & Co., economists predict their measure of unemployment in developed markets will jump by 2.7 percentage points by the middle of this year, having started this year around its lowest in four decades. While there will be some healing as economies recover, they still predict elevated unemployment of 4.6 per cent in the U.S. and 8.3 per cent in the euro area by the end of 2021.

The shock to labour markets also marks a stress test for different social models. The U.S.’s more flexible culture means more will lose their jobs than in the euro area or Japan, where there is a greater onus on retaining staff during a shock.

A first glimpse of the U.S. devastation was apparent in its monthly labour report on Friday, showing employment fell last month for the first time in a decade. Payrolls slumped by more than 700,000, seven times as much as economists had forecast. Those figures are all the more worrying because they cover only the start of the labour-market damage in early March, prior to the biggest rounds of layoffs and closures.

A greater hit is coming therefore, not least since the number of Americans applying for unemployment benefits soared to a record 6.65 million last week, more than twice the record set in the prior week. The 9.96 million combined claims of those two weeks is equivalent to the total in the first 6 1/2 months of the 2007-2009 recession. 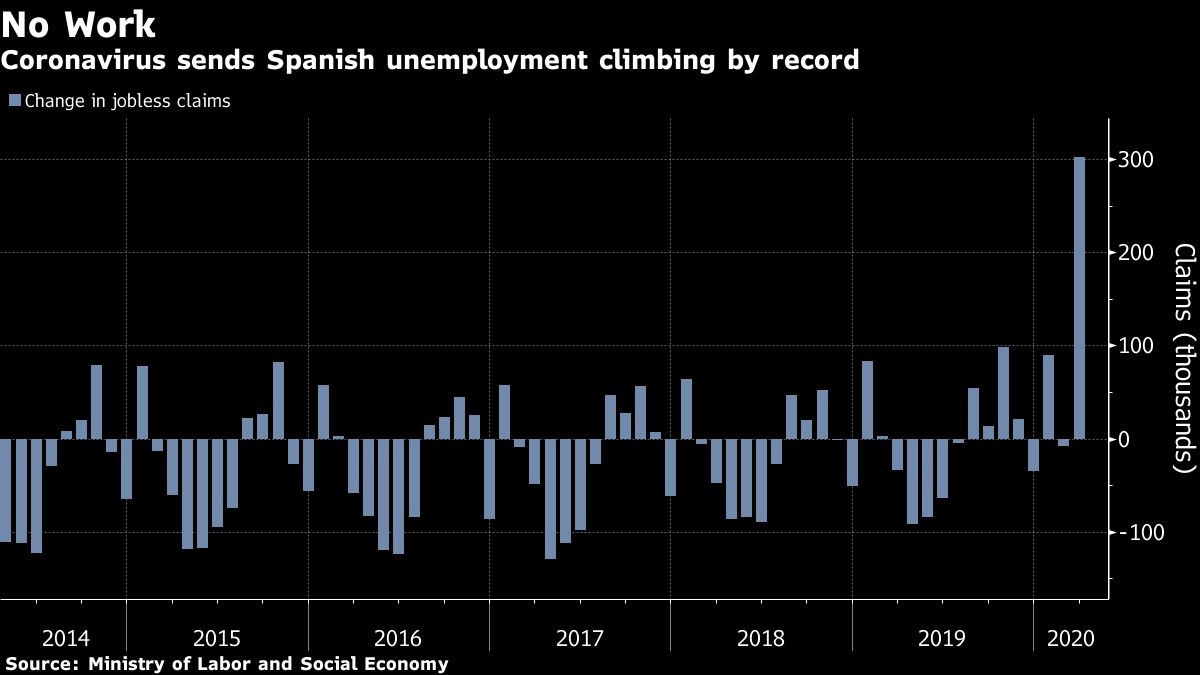 Goldman Sachs Group Inc. this week predicted unemployment there will soon spike to a record 15 per cent.

In Europe, a report showed almost one million Britons applied for welfare payments in the space of two weeks, 10 times the normal amount. The country’s statistics office released a survey of businesses where 27 per cent of them are reducing staff levels in the short term.

There was also a record jobless-claims surge in Spain, whose nearly 14 per cent unemployment rate is already among the highest in the developed world. Austria’s rate jumped to 12 per cent, the highest since the aftermath of World War II.

While German unemployment barely rose in March, like the U.S. report, that data was based on a cut-off date before most shutdown measures took effect. But Detlef Scheele, who runs the country’s labour agency, said next month’s data will show increasing joblessness.

A record 470,000 companies applied for German state wage support in March -- a number that is likely to continue rising -- suggesting that so far around a fifth of the workforce could have working hours reduced.

French businesses have also rushed to benefit from government aid to keep workers on their payroll, while getting paid 84 per cent of their salary by the state. As of Thursday, 400,000 companies applied for 4 million workers -- around 20 per cent of the private sector labour force.

Nordic data already shows the region is suffering a major employment shock, with more than 800,000 people out of work there, including in excess of 620,000 on temporary furloughs in Finland and Norway, according to calculations by Bloomberg. 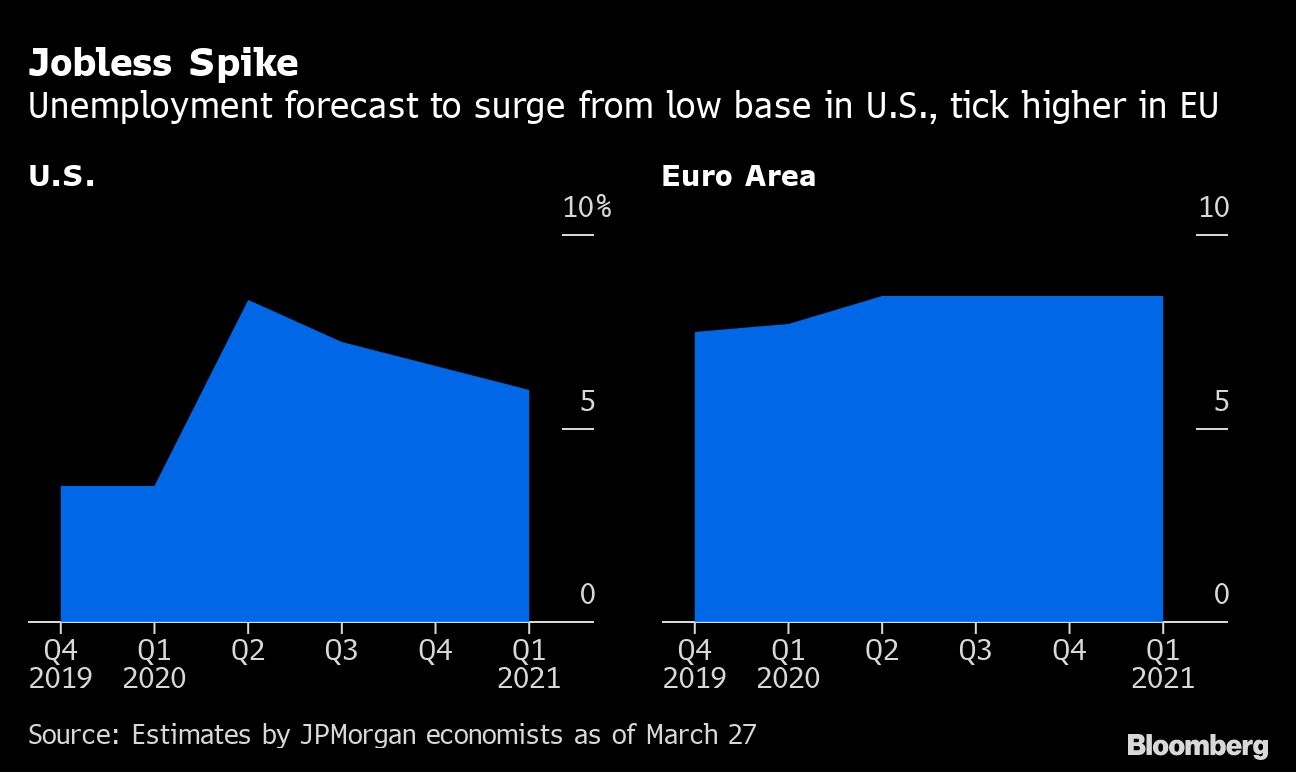 In Asia, Japanese unemployment held at 2.4 per cent in February, but there’s been a sharp drop in the ratio of available positions to the lowest level in three years. More recent developments showed a rapid taking up of emergency loans via a government program for people who have lost their jobs or face wage cuts.

Almost 23 million, or a third of Thailand’s population, registered for the government’s cash handout since it was made available on March 28. The grants are intended to cover only 9 million people, and will pay out 15,000 baht (US$455) to each individual over three months.

Much focus will fall on China, whose economy is returning toward full capacity. Its rate of surveyed urban unemployment jumped to a record 6.2 per cent in February as business shut down. Those interruptions threw an estimated 8 million people out of work, according to economists at Australia & New Zealand Banking Group.

As eye-watering as this phase of the global economic crisis may already be, Peter Hooper at Deutsche Bank says the outlook won’t seem as bleak when the virus outbreak ceases and demand rebounds.

“You should see a fairly quick drop from these very lofty levels of unemployment,” he said.