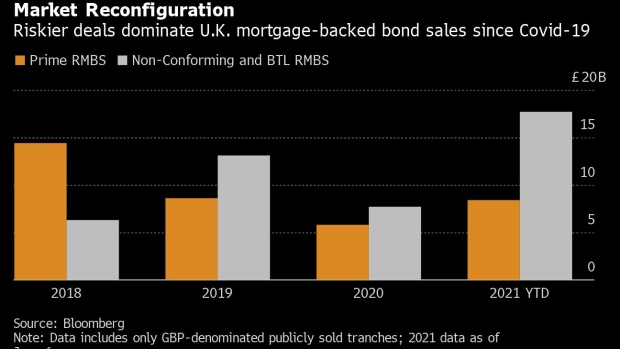 A terrace of residential houses in the Belgravia district of London, U.K., on Tuesday, Nov. 24, 2020. Asking prices for U.K. homes slipped this month as owners sought to get sales agreed in time to benefit from a temporary tax cut. , Photographer: Bloomberg/Bloomberg

(Bloomberg) -- The business of mortgage securitization is getting a jolt from U.K. pandemic aid and a housing boom that’s favoring lower-end borrowers.

Non-bank lenders have sold more than 17 billion pounds ($24.2 billion) of debt pooling non-conforming and buy-to-let loans, the most in at least four years, according to data compiled by Bloomberg. That’s more than double the amount sold during the whole of 2020.

The spike in mortgage securitization in part stems from the Treasury’s tax holiday on property purchases, which is spurring an unexpected homebuying spree in the throes of the pandemic. With more mortgages to fund, lenders are pumping up volumes of bonds. That’s especially true for those that cater to homeowners who don’t meet typical mortgage criteria.

While pandemic programs boost loans to riskier homeowners, massive monetary stimulus has meant access to cheap funds for their lenders. The Bank of England’s emergency bond-buying program has sapped yields on all types of corporate debt, sending investors further afield to find returns.

With deals from non-prime lenders paying juicy yields, bond investors are lining up to be on the receiving end of the binge in riskier loans.

“Securitization is going to be driven by non-bank lenders,” said Ganesh Rajendra, managing partner at Integer Advisors, an investment advisory firm specializing in private and alternative credit markets. “If the bullish conditions in the RMBS market continue, that will be a significant driver for more issuance among non-banks.”

Traditional banks have also stepped up their pace of borrowing, but by a smaller margin. Many have leapfrogged debt markets in favor of cheaper central bank funding that’s one of the bulwarks of Britain’s response to the virus.

And with programs like help-to-buy continuing to drive the housing boom, even after stamp duty is re-imposed, there’s little to stop the issuance flood, according to Galen Moloney, director, private finance at NatWest Markets Plc.

“Policy measures are not going to go away for a while,” Moloney said. “That means that issuance from non-conforming and buy-to-let should continue to consistently come.”

The region’s primary market is ending the week on a quiet note, after issuers across all sectors sold over 50 billion euro-equivalent ($60.8 billion) of bonds -- a milestone breached only four times this year, according to data compiled by Bloomberg