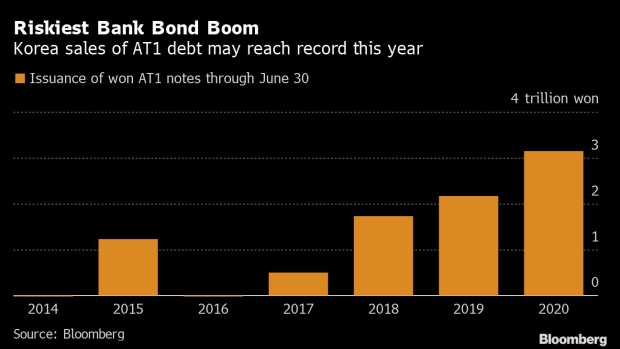 The nation’s banks and financial holding companies issued 3.1 trillion won ($2.6 billion) of so-called additional Tier 1 notes in the domestic market in the first half, the most since Basel III rules took effect in 2013, according to Bloomberg-compiled data. The debt, which counts as capital, carries the risk of being written off first by a lender should its balance sheet deteriorate to a point of non-viability, and recent issues have paid more than twice the yield of ordinary notes.

Investors in Korea are searching for higher debt yields after the central bank cut interest rates to a record low to tackle the impact of the pandemic, which most economists expect to cause the nation’s first economic contraction since the Asian financial crisis. Investor concern about the riskiness of the AT1 notes may be tempered by the fact that Korean borrowers have never failed to redeem their domestic bonds on the first opportunity they had the option to do so and most lenders have AAA issuer ratings locally, according to NH Investment & Securities Co.

“Sales will continue to rise, and the market will digest the mounting supply of such securities as low interest rates persist,” said Choi Seong-jong, a credit analyst in Seoul at NH Investment. Choi expects issuance of AT1 securities by financial holding companies to rise to a record this year.

Underscoring the yield premium investors get for holding those notes, Woori Financial priced 300 billion won of AT1 debt at 3.23% in June, compared with a 1.46% average yield for bank debentures.