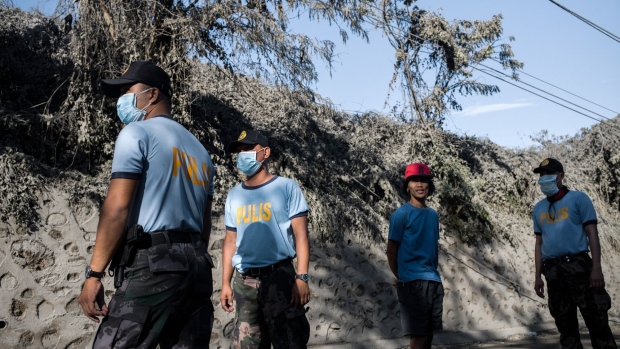 (Bloomberg) -- A tangle of cracks has opened up around an erupting volcano in the Philippines that’s triggered hundreds of earthquakes and urgent pleas for residents to evacuate areas at risk of dangerous fissures and ashfall.

Three towns near Taal Volcano, 65 kilometers (40 miles) south of Manila, are in a police lockdown to prevent residents from returning home. More than 44,000 people are sheltering in evacuation centers, the disaster management agency said, but thousands have refused to leave their homes or drifted back, even as kilometer-high plumes spew ash and debris.

“Hazardous explosive eruption is possible within hours to days,” the Philippine Institute of Volcanology and Seismology said in an 8 a.m. bulletin, repeating warnings since Sunday, when Taal entered a period of intense unrest. Activity, while continuous, has been “generally weaker” in the main crater over the past day, though new cracks were observed in a dozen nearby towns.

That’s a sign that magma could be rising from underground, the agency’s chief Renato Solidum said. Taal Volcano, which lies in the middle of a lake, is a tourist attraction and is among the nation’s most active volcanoes.

A 65-year-old woman was reported to have died of cardiac arrest while evacuating the town of Talisay on Monday, the Office of Civil Defense said Wednesday.

Dark gray, steam-laden plumes have risen above the main crater, and eruptions precipitated 159 volcanic earthquakes in the 24 hours through 5 a.m. Wednesday. That adds to the hundreds reported earlier in the week.

Mass fish deaths are expected in the lake surrounding the volcano because of daily sulfur dioxide emissions that measured 1,686 metric tons on Tuesday.

It’s difficult to predict how long the volcano could remain at the current heightened level of activity, said Mario Aurelio, director of the National Institute of Geological Sciences at the University of the Philippines. Previous eruptions suggest intense activity could persist for weeks to months, he said.

“Its effect on the economy won’t be that big and there can be a fairly fast catch up when the people displaced go back and start reconstruction - that could be a catalyst. The affected area is very localized,” said Victor Abola, an economist at the University of Asia and the Pacific in Manila.

The Southeast Asian nation -- among the most disaster-prone countries in the world -- is “well prepared financially to handle any fallout and damage from this eruption,” Finance Secretary Carlos Dominguez earlier told Bloomberg Television.

Between 2000 and 2016, natural disasters in the Philippines caused more than 23,000 deaths and affected 125 million people, according to the Asian Development Bank. The socioeconomic damage was about $20 billion with average annual damage estimated at $1.2 billion, it said.

--With assistance from Claire Jiao and Clarissa Batino.

To contact the editors responsible for this story: Cecilia Yap at cyap19@bloomberg.net, Jason Gale