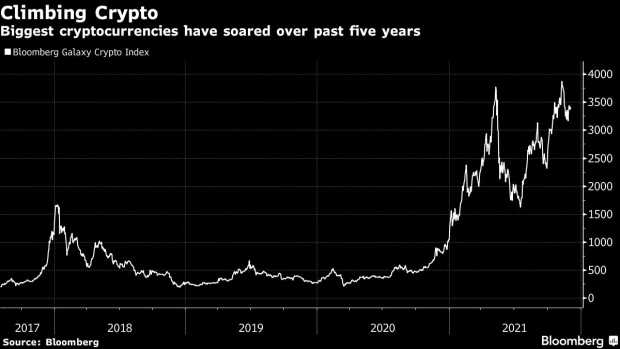 Ritholtz Wealth Management teamed up with WisdomTree Investments Inc. to unveil the RWM WisdomTree Crypto Index -- backed by cryptocurrencies held in storage by Gemini Trust Co. -- on Friday, which advisers can funnel client cash into via Onramp Invest’s technology platform. The Fidelity Advantage Bitcoin ETF, which can invest in the cryptocurrency directly, began trading in Canada on Thursday.

Both products are an offshoot of the U.S. Securities and Exchange Commission’s reticence to approve an ETF that directly holds cryptocurrencies. While SEC chairman Gary Gensler allowed the first U.S. derivatives-linked Bitcoin funds to launch in October, futures contacts roll costs and tracking errors have seemingly kept financial advisers at bay. Instead, that’s led ETF issuers to Canada -- which has embraced Bitcoin ETFs -- and lead managers such as Ritholtz to take matters into their own hands.

“This was really driven by client demand,” said Barry Ritholtz, chairman and chief investment officer of Ritholtz Wealth Management. Ritholtz is a contributor to Bloomberg Opinion and podcaster. “Gary Gensler could have saved us a year of serious work if there was an ETF for this.”

The ProShares Bitcoin Strategy ETF -- the first of its kind -- quickly ranked as one of the most successful launches on record amid a flood of pent-up demand for crypto exposure in an ETF wrapper. However, that initial enthusiasm has cooled. Inflows have stalled, while BITO has slumped roughly 13.5% since its debut. Meanwhile, the world’s largest cryptocurrency has dropped about 11% from an all-time high in that time.

For years, institutional investors and advisers flocked to the physically-backed $37 billion Grayscale Bitcoin Trust (ticker GBTC). However, the fund has been mired in a persistent discount to its net asset value for months, given that shares of the trust can’t be destroyed in the same way as they can in an ETF.

Grayscale applied to the SEC to convert GBTC into an ETF, but U.S. regulators have yet to publicly signal that their stance on physically-backed funds has changed. Fidelity made the case in September in a private meeting with the SEC to urge approval, before the Boston-based issuer ultimately launched their ETF in Canada this week.

Managers will continue to get creative as the SEC demurs on spot ETF approval, according to Bloomberg Intelligence’s Eric Balchunas. Even with its famous volatility, Bitcoin has delivered returns of nearly 6,000% over the past five years, stoking demand.

“ETF or no ETF, advisers are going into what Gensler calls the wild west of crypto,” said Balchunas, senior ETF analyst. “The pressure from advisers is almost boiling over. A lot of advisers feel like they have to do something to service a client base that’s demanding crypto in their portfolio.”