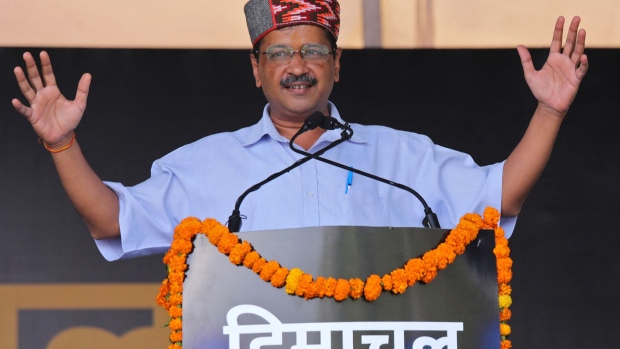 (Bloomberg) -- A rival to Prime Minister Narendra Modi’s party has won municipal elections in the Indian capital, solidifying its hold over Delhi that may see an improvement in the city’s amenities ahead of the Group of 20 meetings next year.

The Aam Aadmi Party, which grew out of an anti-corruption movement a decade ago, already governs Delhi and is expected to make gains in other state elections this month. A victory at the municipal council elections will bolster the appeal of the party’s boss and Delhi Chief Minister Arvind Kejriwal, who is seen to have national ambitions.

AAP won 134 of 250 wards in the city after fiercely contested elections carried out on Sunday. Modi’s Bharatiya Janata Party, which controlled the municipal body for 15 years, trailed with 104 seats, according to Delhi’s State Election Commission.

Kejriwal took to Twitter to thank voters for a “spectacular” win.

Both parties blamed each other for Delhi’s poorly maintained roads and drainage as well as garbage collection and management. The Indian capital is seen to be one of the world’s most polluted capital cities and will be the site for the G-20 leaders summit in September.

The Municipal Corporation of Delhi is one of the largest local councils in the world, serving about 16 million residents. Before the elections, the BJP-dominated municipality had planned to beautify the city in time for the G-20 meetings and plant exotic flowering plants that will have a “soothing effect on the eyes and mind of the citizens.”

An AAP victory could see a quick turnaround in developing civic amenities as the party now controls both state government and the municipality, said Niranjan Sahoo, a senior fellow at the Observer Research Foundation think-tank in New Delhi.

“Improvement can be seen in few months as AAP will showcase it as its electoral promise and the BJP will support the move by compulsion because of the G-20 summit,” he said. “Either way, Delhi residents will benefit.”