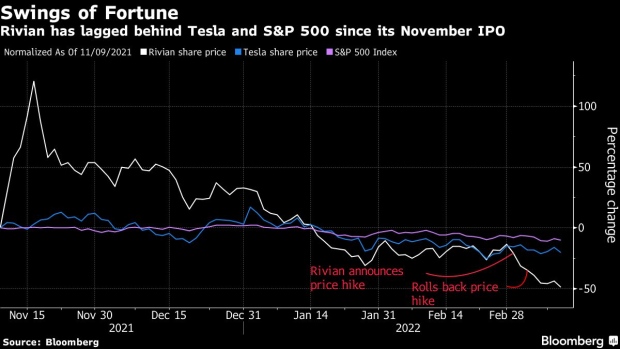 Analysts are paring back their expectations for this once-hyped stock ahead of Rivian’s fourth-quarter results, which are due after the market close on Thursday. At least four analysts have lowered their price targets this month by an average of 40%, according to Bloomberg data.

The cuts come amid concerns that the war in Ukraine will further exacerbate the intense supply-chain problems that plagued the auto industry last year.

“With investors increasingly concerned about Rivian’s production ramp combined with its inability to combat cost inflation with price increases, we have trimmed our price target to $47 from $115,” Barclays analyst Brian Johnson wrote in a note to clients on March 8. Johnson maintained his hold equivalent rating on the stock.

The electric-truck manufacturer’s initial public offering in November coincided with heightened investor appetite for all things EV, driving its market valuation to $153 billion at its peak a few weeks after the IPO. Barely four months later that value stands at about $36 billion, as the market sours on growth stocks amid concerns about growing inflation and an impending tightening of monetary policy -- not to mention the rising risks to the automotive supply chain.

These sector-wide headwinds are bound to weigh heavily on newer EV companies, given the soaring costs of battery raw materials such as lithium and nickel. But Rivian’s challenges go much further, as seen in the company’s recent flipflop on a decision about the price of its trucks.

Rivian said on March 1 that it would raise the prices on its debut vehicles for retail buyers, citing “unprecedented” supply-chain shortages. Then, two days later it back tracked after being hit by customer cancellations. That did not sit well with investors, who sent the stock down 32% over five trading sessions.

“Rivian needs to reassure its investors and customers that it has a handle on its supply chain and can accurately forecast what its costs will be and how it will price its trucks,” said Greg Martin, managing director and co-founder of Rainmaker Securities.

Still, the average analyst price target on Rivian is fairly high at around $116, with 11 analysts rating it a buy, four recommending holding and only one with a sell rating. The reason is despite its issues, Rivian is still considered the best-positioned startup to compete with Tesla Inc. in the rapidly growing EV market.

Wedbush analyst Daniel Ives, whose last published note on the company was on Dec. 17 after the third-quarter results, is waiting for the company’s 2022 production target in order to update his model. Rivian’s “fair value is now dependent on its Street credibility,” he said.