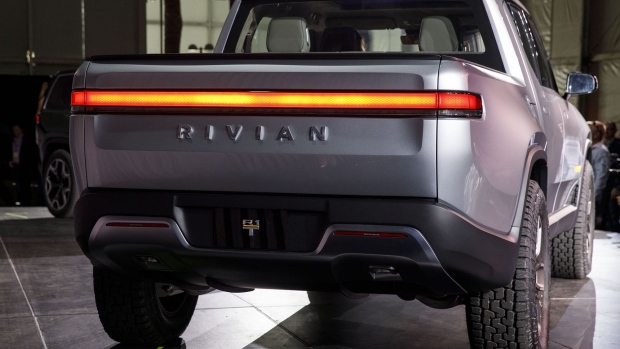 (Bloomberg) -- Rivian Automotive Inc., the maker of electric pickups backed by Amazon.com Inc., has filed for an initial public offering and is seeking a roughly $80 billion valuation, according to people familiar with the matter.

The Irvine, California-based startup submitted its S-1 registration to the Securities and Exchange Commission last week, said the people, who asked not to be identified because it was filed confidentially. The company would like to do an IPO around Thanksgiving, though the timing will depend on approval from the SEC.

A listing at the valuation Rivian is pursuing would be one of the biggest-ever market debuts for an auto company. With $10.5 billion raised from backers including Amazon and Ford Motor Co., an established factory in Illinois and thousands of reservation holders for its R1T truck and R1S sport utility vehicle, Rivian is among the most serious competitors lining up to take on electric-vehicle leader Tesla Inc.

A representative for Rivian declined to comment. The company is working on its IPO with advisers including Goldman Sachs Group Inc., JPMorgan Chase & Co. and Morgan Stanley, Bloomberg News reported in May.

While the company has a who’s-who list of backers, it has yet to build any vehicles for sale and has encountered multiple setbacks starting production. The Covid-19 pandemic has brought about supply-chain disruptions and parts shortages that have forced Chief Executive Officer R.J. Scaringe to postpone its model launches several times.

Even so, the company has grand plans. It’s scouting locations for a European manufacturing site, Bloomberg News reported in February, and is in talks with the city of Fort Worth, Texas, about investing at least $5 billion in a second U.S. assembly plant.

The R1T pickup is slated to go into limited production this month and boasts 400 miles of driving range. The company will build the truck and the R1S, which has been delayed indefinitely, at a former Mitsubishi Motors Corp. plant in Normal, Illinois.

Rivian also has a contract with Amazon to build 100,000 electric delivery vans by the end of the decade, with 10,000 due by the end of next year.