Add another milestone to Rivian Automotive Inc.’s blistering and surprising run as a new stock: It’s now the biggest U.S. company by market value with no revenue.

The electric-truck maker, backed by Amazon.com Inc. and Ford Motor Co., has unseated Lucid Group Inc., an electric vehicle peer with no sales to its name, at the top of the list.

Rivian’s shares have soared 67 per cent from their initial public offering price of US$78 on Wednesday. It’s just about a 25 per cent gain away from overtaking Volkswagen AG, one of the world’s largest car producers, in market value. Meanwhile, Lucid has seen its stock price advance 339 per cent this year. It went public via a merger with a blank-check company in July.

Electric vehicles have been attracting investor interest since mid-2020, when governments, policymakers and corporations announced plans to invest in the industry amid a growing urgency to tackle climate change. Recent strong results from industry leader Tesla Inc. and a big push from car-rental company Hertz into EVs has supercharged all stocks in the space.

Rivian’s rally for the third straight day vaulted its market value above Mercedes-Benz maker Daimler AG on Friday, after racing past Ford and General Motors Co.’s market valuations in the previous two days. 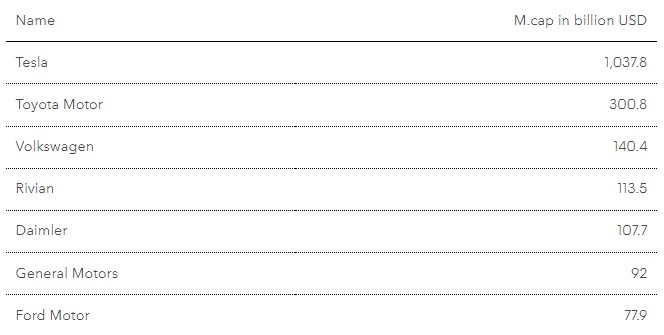