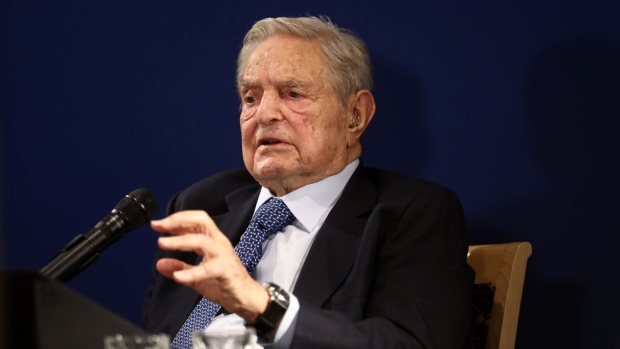 Former U.S. Senator David Perdue, who is challenging incumbent Governor Brian Kemp with the backing of Donald Trump, is holding a Tuesday rally in Rutledge to protest the plant and investor George Soros, who is one of its backers. The attack puts Kemp’s biggest economic development coup squarely in the middle of the U.S. culture wars.

Soros is a Hungarian-born American billionaire investor and philanthropist and a favorite target of right-wing conspiracy theories that are widely seen as antisemitic and are increasingly part of mainstream Republican politics. His Open Society Foundation has donated billions of dollars to progressive and liberal political causes, including reducing poverty and reforming the criminal-justice system.

Rivian is backed by a long list of institutional investors and Wall Street stalwarts, including Soros Fund Management. The firm — which also participated in several private funding rounds before the IPO — owns more than 2% of Rivian's shares outstanding, according to data compiled by Bloomberg. That would make Soros the 10th-largest shareholder. Stakes held by the likes of T. Rowe Price Group Inc., BlackRock Inc. and Amazon.com Inc., among others, are significantly greater.

The Kemp campaign plans a press conference Tuesday to respond to Perdue’s accusation, spokesman Tate Mitchell said. Democratic gubernatorial candidate Stacey Abrams’s campaign referred to her comments on the Rivian announcement in December, in which she thanked organized labor for helping bring the plant to Georgia.

Perdue, who entered the gubernatorial race in December, has campaigned largely on his support from Trump — and his embrace of the ex-president’s false claims of a stolen 2020 election. The former president has targeted Kemp for not doing more to overturn Joe Biden’s victory in the state.

The planned plant near Rutledge, about 45 miles (70 kilometers) east of Atlanta, is poised to be the largest single investment in Georgia history, promising to employ more than 7,500 people and pump out 400,000 electric vehicles annually, with production due to start in 2024. Construction is scheduled to start in the summer but no specific date has been given by the company, which announced the location in December.

The plan has local detractors, who complain that it would bring environmental problems and Atlanta-style sprawl to the community. They’ve launched a Facebook page and a GoFundMe site to raise money to hire a lawyer. The opponents contacted Perdue with their complaints, as well as Kemp and Abrams, according to Chas Moore, one of the organizers of No2Rivian.

“We had multiple citizens, including myself, reaching out to David’s campaign,” Moore said. “We are excited that he recognizes the dangers of how the state and Governor Kemp have chosen large corporations over the general public.”

Rivian said it would host events in the spring where residents could air their complaints.

While Rivian has produced relatively few vehicles, it’s seen as a genuine competitor to legacy automakers and EV market incumbent Tesla Inc. That's in large part due to its financial might. The company's November IPO was the sixth biggest in U.S. history, generating $13.5 billion in net proceeds.