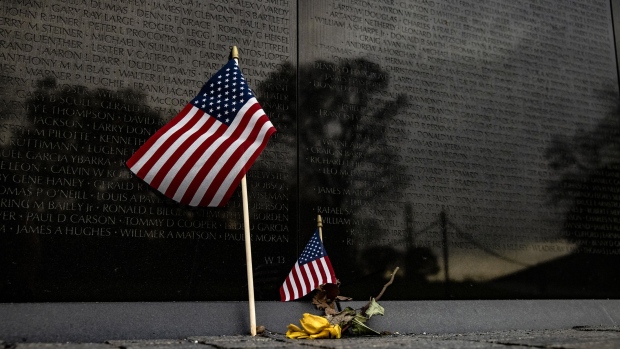 WASHINGTON, DC - NOVEMBER 11: A flower and two American flags are left at the base of the Vietnam Veterans Memorial Wall on Veterans Day on November 11, 2020 in Washington, DC. Veterans Day is when Americans honor those who served the country in the Armed Forces. The Vietnam Veterans Memorial Wall contains 58,320 names of those who gave their lives during the conflict in Vietnam. It was designed by Maya Lin and was completed in 1982. (Photo by Samuel Corum/Getty Images) , Photographer: Samuel Corum/Getty Images North America

(Bloomberg) -- Congressional efforts to pass a $1.4 trillion spending bill funding the federal government before a Dec. 11 shutdown deadline may be in trouble after new demands from the Trump administration.

Treasury Secretary Steven Mnuchin on Friday demanded cuts to domestic spending as part of the bill, which could jeopardize the ability of Congress to complete the measure, according to people familiar with the situation.

Mnuchin and the White House have raised an objection to a plan by Senate Republicans and House Democrats to exempt $12.5 billion in Veterans Affairs funding from the $1.4 trillion budget cap established in a 2019 debt ceiling deal Mnuchin struck with Congress, the people said.

The funding is required for expanded health care for veterans under the VA Mission Act passed in 2018. If the money isn’t exempted from the budget cap, Congress would need to find $7 billion in cuts to other domestic spending this year, something Democrats oppose.

If the dispute hardens into an impasse, it could stymie the ability of Congress to pass a giant, full-year funding bill next month, the people said.

The U.S. has been operating on stopgap funding since fiscal 2021 began on Oct. 1. Speaker Nancy Pelosi and Senate Majority Leader Mitch McConnell want to complete an omnibus bill to provide stable funding for the federal government through Sept. 30.

At this point, talks between the House and Senate appropriations committees await resolution of the VA funding issue. Only then can an outline for all 12 parts of the omnibus be completed, and talks on program-level disputes such as President Donald Trump’s border wall be entertained.

The White House and Treasury didn’t immediately respond to requests for comment. The push on VA funding was first reported by The Washington Post.