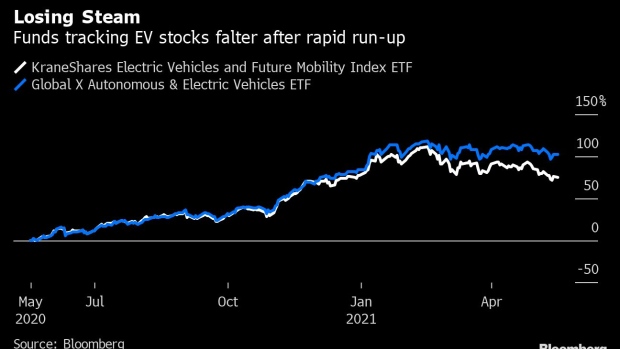 As Wall Street sours on speculative tech bets, ETF assets tracking electric and battery-focused cars are set to drop this month for the first time since March 2020, according to data compiled by Bloomberg.

Prices of exchange-traded funds in the sector have largely stalled in recent weeks, and traders have pulled $34 million from them in May. That could make this the first month of outflows since April last year and compares with record inflows of $1.4 billion in January.

“As these industries evolve, you go through these ebbs and flows in investor sentiment,” said Tom Hainlin, national investment strategist at U.S. Bank Wealth Management. “It’s not surprising to see the level of volatility in those areas that are still fairly new.”

Enthusiasm for everything in the green sector soared earlier this year, buoyed by optimism that President Joe Biden would unleash a wave of clean-energy policies alongside a Democratically controlled Congress.

That brought billions of dollars into electric-vehicle stocks, prompting Arnott at Research Affiliates to warn that investors were getting ahead of themselves. The combined value of eight manufacturers had soared to $1 trillion, he pointed out, despite the likelihood that not all of them would succeed.

But now investors are reassessing their most speculative bets as an economic recovery from the pandemic gathers steam. The prospect of rising inflation in particular is making them rethink pricey investments based on hoped-for future earnings.

“We are seeing it deflate,” said Phil Toews, chief executive officer of asset manager Toews Corp., of the EV sector. “Valuations had moved into completely unrealistic levels, it was clearly ready to burst.”

Tesla Inc., the most famous electric-vehicle maker, is down more than 33% from its January peak. CEO Elon Musk’s unpredictable commentary on areas of the market like Bitcoin and fatal incidents involving its cars have added to the wider valuation worries.

The KraneShares Electric Vehicles and Future Mobility Index ETF (ticker KARS) and the Global X Autonomous & Electric Vehicles ETF (DRIV) have dropped about 17% and 7% from their February highs, respectively. During the same period, the S&P 500 gained about 6%.

Alongside stock declines it all means that total assets in the category have dropped to $4.8 billion from $5.1 billion in at the end of April.

Still, many investors have stayed loyal to their bets.

The flood of cash funneled into the funds earlier this year may have slowed to a trickle, but huge outflows haven’t materialized yet either. DRIV has lost only $1.8 million in May, while KARS hasn’t seen inflows or outflows.