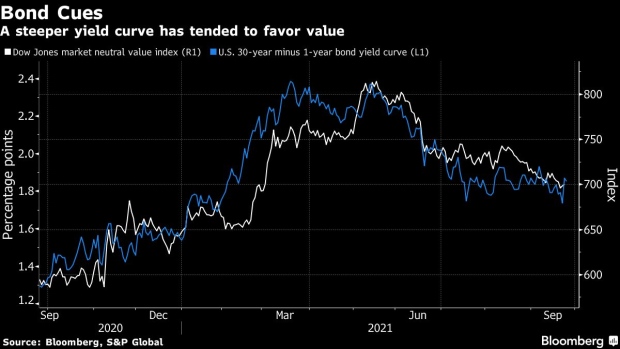 (Bloomberg) -- Anyone who ignored Rob Arnott’s pleas to go all-in on value investing would have missed one of this year’s hottest rallies. The quant trade may have cooled recently, but the Research Affiliates founder says a second chance has arrived.

In the U.S., Europe, Japan and emerging markets, value stocks are still cheaper than they have been for at least 97% of the time in data going back decades, Arnott and his team wrote in a note this week. At the same time, coronavirus vaccines remain effective in capping death rates, meaning the economic recovery should keep boosting cyclical names.

“We may never again see a better opportunity to buy value stocks,” Arnott wrote with Vitali Kalesnik and Lillian Wu.

After a rough few weeks, value shares have gained in the past two days as expectations of reduced monetary stimulus later this year trigger a steepening of the bond yield curve.

Quants don’t always agree on how much sway bonds hold over factors, but generally speaking higher yields should be good for value stocks -- their short-term cash flows become more attractive than the long-term profits promised by growth shares such as Big Tech.

Meanwhile, although value stocks surged sharply after vaccines were introduced in November, they’re still far from reversing declines since 2017.

Their first-half rally was disrupted in May as the emergence of new virus variants slowed the economic recovery. In the exchange-traded funds market, inflows to smart-beta value products have slowed to a trickle -- a mere $47 million this month -- while investors steer cash to the opposing growth strategy instead.

“The bottom line is that even after value’s recent partial rebound, the strategy in most regional markets is still priced at very attractive valuations,” the Research Affiliates team wrote.

It’s a familiar refrain from Arnott, who alongside the likes of AQR Capital Management’s Cliff Asness is one of the staunchest defenders of the value strategy. Their message these days: These stocks are still cheap -- and for no good reason -- at a time when almost everything is expensive.

As economies continue their recovery from the pandemic, the trends that have fueled the high valuations and market concentration of the big tech stocks are likely to reverse, Arnott and co. argue. At the same time, value shares could offer real returns of as much as 10% per year in certain regions such as emerging markets in the coming decade.