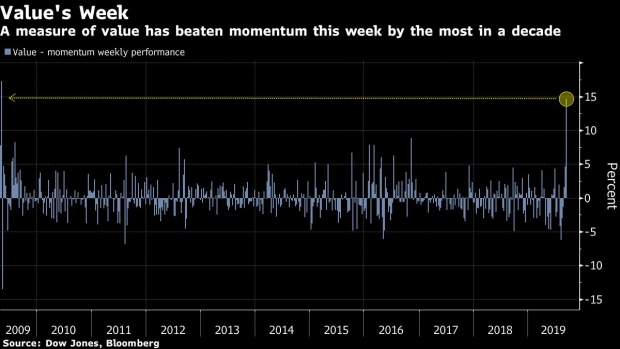 (Bloomberg) -- For years, Rob Arnott has been warning of distortions brewing in factor strategies. After this week’s momentum blowup, he’s feeling redeemed. And saying that the worst may not be over.

To the Research Affiliates co-founder, the rotation from growth to value in the stock market has a familiar ring. It smacks of quantitative strategies growing in popularity so when the trend breaks, it breaks big.

“The multi-factor community got slapped around pretty hard on Monday. What caused it was probably nothing more than a crowded trade precipitating a snap-back,” Arnott said in a phone interview. “Whether this is the start of a comeback for value is arguably the most important question here because value has under-performed now for 12 years.”

That dry spell has led some to question whether the investing style was dead. Now value -- cheap stocks, basically -- are having a moment in the sun. A Dow Jones market neutral value index registered its best two-day streak since at least 2002 and, even after losses Thursday, was set for its best week versus momentum in a decade.

Whether it’s a quick rejiggering or a prolonged change is crucial for the billions of dollars keyed to strategies that invest based on factors, which classify stocks based on different characteristics like growth potential or volatility. For hedge funds so attuned to high momentum areas of the market, the latest carnage has been painful.

Theories that de-emphasize the influence of factors exist for this week’s events, to be sure. One simple explanation is that a rapid rise in Treasury yields battered the bond-proxy names that have come to dominate momentum indexes, while lifting the banks and energy companies that populate value.

To Arnott, it’s possible this week marked a meaningful shift from the norm since the financial crisis. Of course, it’s impossible to know for sure, but given that value stocks are so abnormally cheap relative to growth, he says the odds are in their favor. “It’s far more likely that value will win in the coming year, two years, three years, five years, than that growth will continue on a roll.”

Arnott’s Research Affiliates uses what he calls fundamental indexing to locate under-priced stocks using weightings other than market-cap. As smart-beta pioneer whose firm specializes in value strategies, he’s not exactly an unbiased commentator, but has been putting the firm’s money where his mouth is.

Normally, his shop’s strategies hold the same relative valuation as value indexes, but right now they’re 15% cheaper, he said. And if value continues to lag, he would move even deeper into a value tilt. Regardless of when the shift from growth to value officially comes, he wants his portfolios to be prepared.