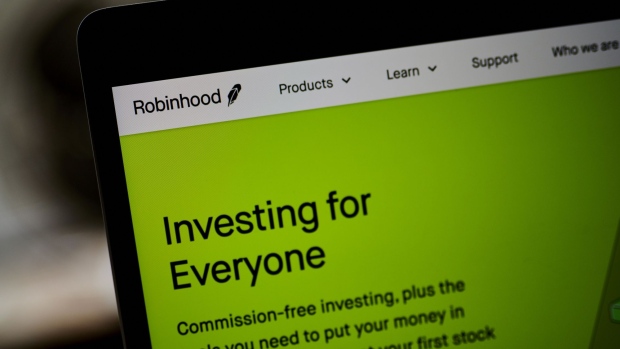 (Bloomberg) -- For any company on the brink of going public, the final days before its trading debut can feel like a big balancing act.

Even by those standards, Robinhood Markets Inc. is walking a uniquely fine line.

The company behind the trading app that starred in this year’s meme stock run-up is carving out an unusually large role for those very same novice investors. On Thursday, when its shares are expected to begin trading after they price late Wednesday, the wisdom of that strategy will be put to the test.

The interests of bankers, founders and employees may not always align, but they all typically cross their fingers for a company’s stock price to “pop” much higher once it begins trading after an initial public offering. That boost is important because it tends to indicate strong demand among individual investors who couldn’t get their hands on shares before they hit the exchange.

That’s not the case for Robinhood, which has said it will reserve up to 35% of shares for its app users at the pre-trading range of $38 to $42 apiece. Chief Executive Officer Vlad Tenev said in a live-streamed roadshow on Saturday that it will likely be one of the largest such allocations to retail investors ever.

While that decision fits with Robinhood’s self-described mission of “democratizing finance,” it also sets the company up for a make-or-break moment when its shares begin trading on the Nasdaq Stock Market under the symbol HOOD.

For one, Robinhood warned in a filing ahead of the offering that unconventionally high retail allocation could lead to volatility in the shares. That could make it something of a meme stock itself -- though it stopped short of referencing companies like GameStop Corp. that experienced a wild surge in share price earlier this year, on soaring demand from individual investors. Regulators are still piecing through what happened, including examining whether Robinhood employees traded ahead of the brokerage’s halts on purchases of those securities, a detail the company revealed in a Tuesday filing.

At the same time, keeping the offering accessible and attractive to that large retail base will be an important consideration for Robinhood to make its IPO a hit, said Josh White, an assistant professor of finance at Vanderbilt University. Venture capital investors will likely watch closely how it all unfolds, he said.

“If Robinhood’s successful and they go public, and it looks like they’re going to trade at this multiple, now I know how much this next business that’s very similar might be worth,” White said.

Robinhood’s marketed price range fell short of where it was trading in recent months in the private markets. While some trades happened in line with the current target, according to people familiar with the matter, other transactions were around $55 per share and sometimes even higher, one of the people said.

Based in Menlo Park, California, Robinhood is casting its own IPO as a step to further its ambitions to provide small-time investors access to public offerings this year, starting with medical scrubs maker Figs Inc. Typically, hedge funds and large money managers benefit from buying shares ahead of an IPO, while retail investors wait until after the company debuts, potentially missing out on any initial rally.

Through Robinhood’s app, however, a individual investor can request to buy pre-IPO shares by tapping a green button that says “I’m interested.” Robinhood will then randomly distribute the retail allotment to those clients.

Beyond its client base, Robinhood is also walking a tightrope with U.S. regulators. On Tuesday, the company reported that in addition to the examination of employee meme stock trades, the Financial Industry Regulatory Authority is investigating the fact that neither Tenev nor Chief Creative Officer Baiju Bhatt is registered with the watchdog. Robinhood said it is cooperating with the inquiry.

That comes on the heels of revelations about other regulatory probes. Robinhood expects to pay about $30 million to New York financial regulators for alleged violations of anti-money laundering rules and cryptocurrency risk oversight. It also agreed to pay almost $70 million to settle a sweeping set of Finra claims that it misled customers about trading with borrowed money, and lapsed in its oversight of options trading and technology.

Despite the inquiries, Robinhood’s valuation puts it in league with other publicly traded firms that cater to retail customers. Coinbase Global Inc., the cryptocurrency trading platform that went public through a direct listing earlier this year, has a $49 billion market value. Interactive Brokers Group Inc., which has fewer but wealthier clients compared with Robinhood, has a market capitalization of about $25 billion.

Asked about his competitor’s valuation, Interactive Brokers Chair Thomas Peterffy said he’s eager to see how investors will react to the offering -- and wonders whether Robinhood may end up trading like a meme stock itself.

“Robinhood has done an incredible service for the United States,” he said. “They got millions of young people to get their feet wet trading stocks.”