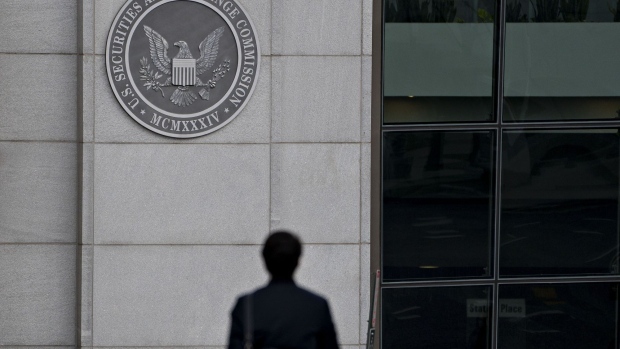 A pedestrian walks near the U.S. Securities and Exchange Commission headquarters in Washington, D.C., U.S., on Thursday, Jan. 2, 2020. The federal appeals court in Manhattan today said the government may pursue insider-trading charges under a newer securities-fraud law not subject to a key requirement of the statute prosecutors traditionally use. Photographer: Andrew Harrer/Bloomberg , Bloomberg

(Bloomberg) -- It was easy-money arbitrage fueled by this year’s meme stock mania. Some brokerages were essentially offering free cash, while others weren’t clawing any of the funds back for the second leg of the wager.

And the traders who did it got the clever idea from Robinhood Markets Inc. Chief Executive Officer Vlad Tenev, who unwittingly inspired them with a remark he made at a high-profile congressional hearing in February.

The trouble -- and the reason the Securities and Exchange Commission dropped the hammer Monday -- was the scheme involved illegal wash trading, or trading with yourself.

Read more: Robinhood, Meme Stocks and Investing as a Game

The U.S. equity market, including the related options business, is built atop a system known as maker-taker. Traders who submit orders that sit on an exchange’s public order book are, in many cases, paid a “maker” rebate -- an incentive designed to attract more liquidity. Those who trade against those resting orders are charged a “taker” fee.

Gu, who lives in Miami, and Lee, a resident of Torrance, California, placed the first part of their trades through a broker based in Greenwich, Connecticut and another in Morristown, New Jersey, that pass along the maker rebates to their clients, according to the SEC’s complaint. They targeted out-of-the-money puts for their resting orders, investments that others were unlikely to trade against because the holdings offered little opportunity to make money -- barring something nefarious.

Gu, 35, and Lee, 37, then traded against their own orders through accounts they opened at brokers including Robinhood, which doesn’t pass along “taker” fees to customers. In summary, their profits came from collecting maker rebates without having to pay taker fees. Gu executed approximately 11,430 wash trades, pocketing $668,671, according to the SEC. For Lee, it was 2,360 wash trades and $51,334 of profits, the regulator said.

Lawyers for Gu and Lee didn’t respond to requests for comment.

The SEC didn’t name Tenev or Robinhood. Instead, the agency refers to a “Broker-dealer B” based in Menlo Park, California. The SEC complaint adds that the firm’s CEO appeared before the House Financial Services Committee on Feb. 18, where he said the firm “pioneered commission free and zero contract fee options trading.”

For Tenev, that day was a grueling five-hour ordeal. He faced dozens of probing questions from lawmakers, who accused Robinhood of turning the stock market into a casino while failing to protect retail investors amid the frenzied run-up of GameStop and other stocks.

But Gu heard opportunity, according to the SEC. The former trade-system developer who had worked at several financial firms concluded from Tenev’s testimony that Robinhood didn’t charge its customers “take fees,” the agency said.

Gu’s friend, Lee, joined in the scheme, according to the SEC. While Gu is contesting the regulator’s claims, Lee agreed to pay a $25,000 fine and about $52,000 in disgorgement and interest without admitting or denying wrongdoing. The SEC added that its investigation didn’t initially prompt Gu to stop breaking the law.

“During investigative testimony, Gu said that, although he is not currently using his trading strategy, he may do so in the future,” the SEC said in its complaint. “Gu also admitted that he continued to engage in wash trading after receiving the SEC’s investigative subpoena.”