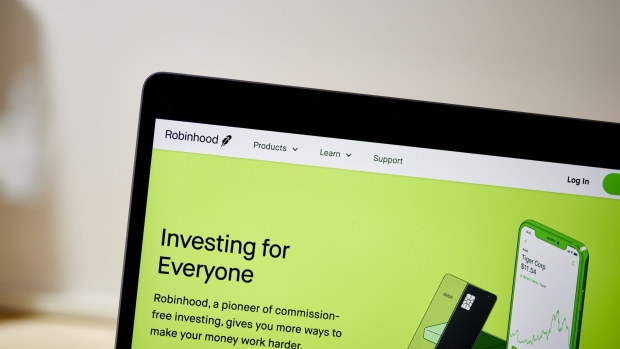 The website home screen for Robinhood is displayed on a laptop computer. , Bloomberg

Robinhood Markets is weighing whether to restore public access to data on its customers’ trading activity after pulling it about two months ago.

“We’re looking into it,” Robinhood co-founder Vladimir Tenev said in an interview with Bloomberg reporters and editors.

Customers of the online brokerage have expressed interest in being able to monitor what their fellow investors on the platform are buying and selling in real time, and the firm is exploring its options, he said.

“We hear the desire to have some of that data available again,” said Tenev, who’s also co-chief executive officer. “We want to make sure we have all the proper safeguards and the data is actually being presented in an accurate way that’s not confusing or misleading.”

With retail trading surging this year, fueled by zero commissions and lockdown boredom, tracking the moves of newbie day-traders became an obsession. A website called Robintrack.net, a visual aggregator of the Robinhood data that wasn’t affiliated with the brokerage, made that easy for just about anyone.

The number of customers holding a particular security was plain to see and updated frequently, but Robinhood cut the feed in August, saying third-party platforms were reporting the data in a way that could be misunderstood and wasn’t representative of how clients use the platform.

If Robinhood restores the data feed, it will do so in a way that doesn’t misrepresent client behavior and probably exist as an in-app offering, Tenev said in Tuesday’s interview.

Hedge funds, institutional investors and day traders had all turned to Robintrack for insight. Traffic to the website surged so much earlier this year that its creator was forced to make operational changes to keep up, and some users pulled the data into their own programs. In the absence of the public Robinhood data feed, investors have turned to the likes of Twitter.com and Reddit for clues.

Tenev said Robinhood doesn’t plan to sell the data, even if there’s demand for it, and that it has many other products and revenue streams.

“It’s interesting from an information and educational standpoint,” he said. “That’s why I’m personally interested in figuring out a way to reintroduce it safely.”