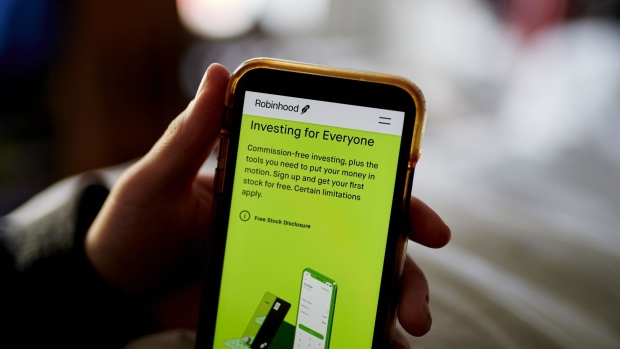 The Robinhood website home screen on a smartphone arranged in the Brooklyn borough of New York, U.S., on Saturday, Dec. 19, 2020. Robinhood Markets will pay $65 million to settle allegations that it failed to properly inform clients it sold their stock orders to high-frequency traders and other firms, putting a major compliance headache behind the brokerage even as new ones emerge. Photographer: Gabby Jones/Bloomberg , Bloomberg

Crypto revenue was $48 million, a 6% decline from the prior quarter, missing the $55 million average estimate of analysts surveyed by Bloomberg. Still, it increased 304% from a year ago. Shares of Robinhood fell about 10% in post-market trading after the firm reported total revenue that was also short of Wall Street estimates.

Crypto offerings has been a core strategy of Robinhood, and its zero-commission transactions have helped it enlist new users, making it a major competitor to cryptocurrency exchanges such as Coinbase Global Inc. During the second quarter last year, Robinhood brought in $233 million in crypto-trading revenue, as retail investors plowed into digital assets like Bitcoin. In the third quarter, crypto revenue -- 40% of which was made up from Dogecoin trading -- plunged to $51 million.

The crypto numbers look “a little bit light compared to last quarter -- so huge growth year-over-year, but down from last quarter, perhaps because they don’t have Shiba Inu,” said Julie Chariell, an analyst at Bloomberg Intelligence. “That’s the one coin that they’re missing, everyone’s waiting for. But the key part to that now is what happens in the first quarter and we know it’s looking ugly so far this year.”

Robinhood, which launched an initial version of its Crypto Wallets, said it’s preparing for a full launch of the wallets in first quarter. It also targets offering crypto platform to customers internationally this year.