No real signs of market rotation into value: Equity strategist

Tuesday afternoon, a smallish Chinese real-estate firm, ticker symbol DUO, went crazy on the Nasdaq. Out of the blue, in a vacuum of news, depositary receipts of the Shenzhen-based outfit shot up 13-fold, taking its market capitalization to US$4 billion.

Nobody had a definitive reason why. But people could guess. Its name: Fangdd Network Group Ltd., sounds like the acronym for that amalgamation of American megacaps, the “Faangs,” comprising Facebook Inc. and others. Those shares were rallying, and it was easy to believe people had gotten it into their heads that Fangdd could — somehow — move along with them.

Robinhooders heard everyone is buying FANG stocks and they rushed out and bought FANGDD, a Chinese company. $DUO from $10 to $130 in 4 hours@GreekFire23 @RudyHavenstein

A lot of the stock market has this tinge of late. Get people to believe that other people will believe that a stock will go up, and fear-of-missing-out will take over. More than 15,000 retail clients of the Robinhood investing app added DUO to their account last week, a phalanx of day traders marching to war.

Newly minted equity experts in chat rooms, enticed by ever-falling fees, empower themselves and push shares of companies with not much profit into the stratosphere — sound familiar? Comparisons between today and the dot-com bubble write themselves, in the era of the Robinhood market. Whether this episode ends like that one has become an obsession of Wall Street.

“Retail participation is at levels we haven’t seen in 20 years,” said Benn Eifert, managing partner of QVR Advisors. “In terms of the most dramatic rises in speculative behaviour that’s generating many of the strangest outcomes in markets right now, it’s Robinhood-centric.” 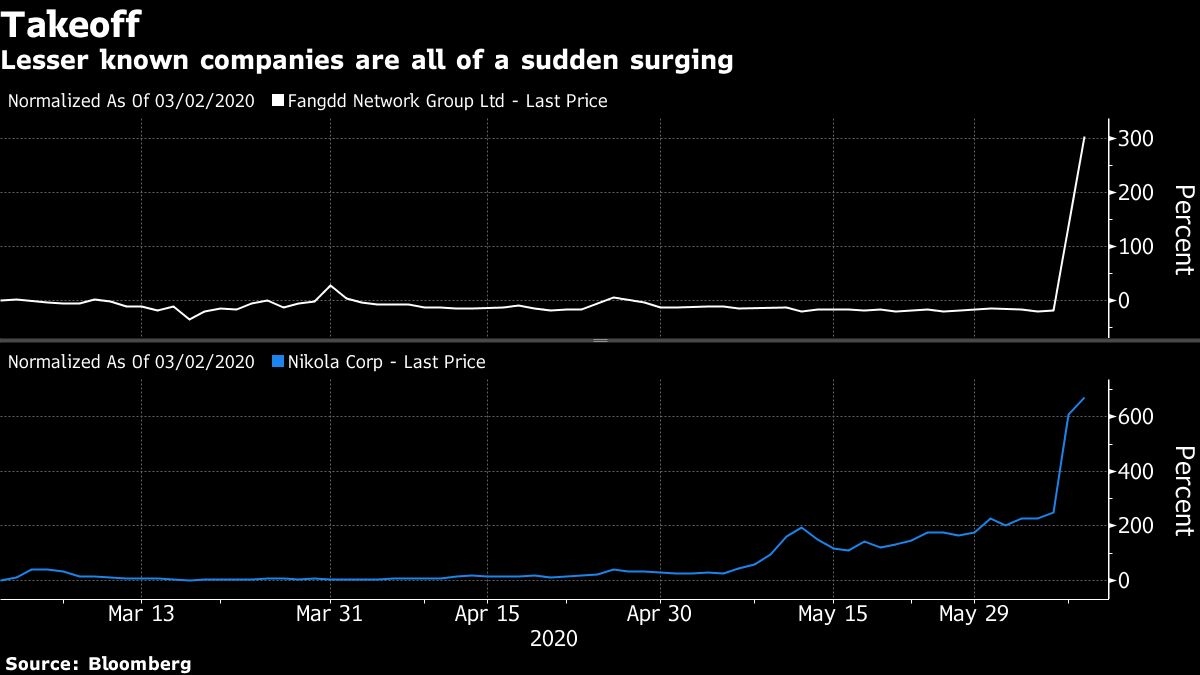 Everyone knows the dot-com bubble ended badly — in a two-year bear market that cut the value of the U.S. equity market in half. Then again, it took years for warnings to come true that people would pay a price for blind speculation. The Nasdaq 100 doubled in 1999 — fortunes were made for people who sold at the top. How many will pull that off this time is a question that haunts this and every speculative episode.

Just because small-time investors are a presence doesn’t mean they’re wrong. To date — even with Thursday’s walloping — the lion’s share of their trades have been money makers. Stocks surging now are the ones that fell the most in February and March — evidence to some observers of a healthy buy-low bent. And while expected earnings may not justify the moves, buying equities when the Federal Reserve has all but guaranteed rock-bottom interest rates through 2022 may be a perfectly logical decision.

Asked if the Fed was inflating markets on Wednesday, Chairman Jerome Powell said the central bank’s focus is the economy, the labour market and inflation, rather than the movement of asset prices in any direction.

“The Fed doesn’t believe, and shouldn’t believe, that it can forecast the stock market, and therefore recognize a bubble in real time,” said Princeton University economist Alan Blinder, a former Fed vice chairman, in a Bloomberg Television interview. “They’re pretty easy to recognize after the fact, after they burst. But, in real time, in a predictive way, pretty much impossible.”

Also: it’s not like people never get punished for hitching on to rallying stocks. A day after jumping 395 per cent, Fangdd Network gave about four-fifths of the gain back. And the whole market gave up US$2 trillion of value when the S&P 500 lurched almost six per cent a day later.

Still, by conventional measures, valuations are stretched, even after Thursday’s drop. The benchmark’s 12-month forward price-earnings ratio at 21.6 still ranks among the highest in two decades. Versus company sales, the Nasdaq Composite Index is trading around the most expensive levels since at least 2001. Then again, if the dot-com crash is the standard, prices would have to go significantly higher to match that episode.

How crazy did it get this week? This is a market where a company with forecasts for almost no revenue jumped above a $30 billion market-cap partly because it used inventor Nikola Tesla’s first name as its own. Small Chinese firms that trade in the U.S. surged on no news, with percentage gains in the triple digits. Bankruptcy stocks are the flavor of the day, shares doubling left and right, with Hertz Global Holdings Inc. the poster child.

Over three days, just weeks after filing for bankruptcy, Hertz surged 577 per cent. The next session, the struggling car-rental company fell 39 per cent in the first 15 minutes of trading, only to erase those gains and trade positive at one point in the day. By the end of the week, Hertz got approval from a bankruptcy judge to let it sell up to US$1 billion of new shares that are potentially worthless. The stock jumped 37 per cent Friday.

Trading volume in Hertz shares has surged in June — 63 times what was usual in 2019. The number of Robinhood users holding the stock has swelled to 160,000 — that’s roughly 100,000 more than just a month ago, according to website Robintrack, which uses the brokerage’s data but isn’t affiliated with it. Near 140,000 Robinhood users now hold Nikola Corp, more than do Netflix Inc.

“It is definitely a sign of a bubble,” said Matt Maley, chief market strategist for Miller Tabak. “That’s another sign of froth -- people deciding, ‘I just need to bet, therefore I’ll bet on anything.’ And even though they don’t know anything about the stock market, they’re betting on it now. You’ve also seen that pick up in the options market, which is obviously a lot more speculative than the regular market.”

Retail money is taking a bigger share of volume. Small-account trades, those with US$2,000 or less in investment, have increased to 2.3 per cent of the total, up from 1.5 per cent at the beginning of the year, data compiled by Goldman Sachs show. A similar trend showed up in the options market, with one-contract transactions surging to 13 per cent from roughly nine per cent. They’re relentlessly bullish. The smallest of traders bought more than 14 million speculative call options in the week ended June 5, according to Sundial Capital Research. That’s a record, by far. 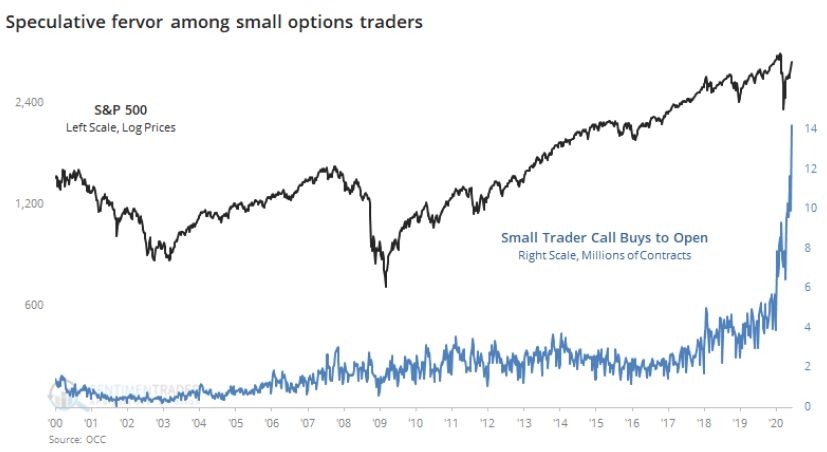 Traders are taking to chatrooms to hype stocks and brag about their winnings, reminiscent of the late 20th century. Users of a Reddit forum called r/wallstreetbets, or r/WSB for short, have shown an astonishing capacity to move prices. Back in February, companies including Virgin Galactic Holdings Inc. and Plug Power Inc. went berserk after being mentioned on the board.

In hindsight, maybe there was a bubble back then — one that burst on Feb. 19. Shares of Virgin Galactic and Plug Power both peaked that day after eye-popping runs. So too did the S&P 500, before the benchmark began its US$10-trillion plunge. Four months and an equity round-trip later — the Nasdaq 100 reaching 10,000 for the first time — much of it has been re-inflated. Tuesday, a post on the r/WSB cited Sundial data showing small-trader call buying made up more than 50 per cent of total volume in the week ended June 5, the most since 2000. “Good job,” it read.

“We have Instagram influencers and now we have Reddit influencers,” QVR’s Eifert said. “They post a trade idea in an option, in a single name, and within an hour you see hundreds of thousands of call options placed, which is totally insane.”

Andrew Adams, a strategist at Saut Strategy, says his anecdotal indicators are “flashing warning signs like crazy.” He spent the first part of the week trimming his positions. His friends and family who don’t normally follow the stock market have been asking him what to buy. His inbox has emails saying: “I’ve missed this move but now want to buy, what should I do?” People are cracking jokes about Wall Street legends who denounced the rally.

“I even had one stock-market novice friend text me to say that he’s been making a lot of money buying call options since he’s been working from home lately and he’s wondering if he should just quit his job to trade for a living,” said Adams. “I’ve learned from past experience to be very careful when we start seeing stuff like that.”

Back in the dot-com days, there was a belief that no matter a company’s profits or sales, someone would come along to scoop up shares at an ever higher price — a “greater fool.” Online grocer Webvan Group Inc. spiked 66 per cent in its first day of trading. When Drkoop.com Inc., an online consumer health-care network, went public, shares jumped 62 per cent that first day. By 2001, both companies had failed.

Today, TheGlobe.com Inc. trades for less than a penny, but back in its 1999 heyday, shares of the internet destination once surpassed US$40. One day in April after announcing a stock split the stock surged 34 per cent and more than 14 million shares changed hands, even though the company was still unprofitable.

“In ‘99 you wanted to get the next trade for the next day and the next week. That’s a bit what it feels like here,” said Mark Wagner, director of investments at Campbell Wealth Management. “You’re just saying, how can I in the short-term make something from this? There’s similarities to it, but the pace of it seems to be much more intense and more broad-based now.”

The buying stampede has whipped up price momentum to levels not seen in almost three decades. At Monday’s close, 224 members in the S&P 500 had their 14-day relative strength index, or RSI, exceeding 70, a threshold considered by chartists as a sign of stocks running too far too fast. That’s the most since 1991. 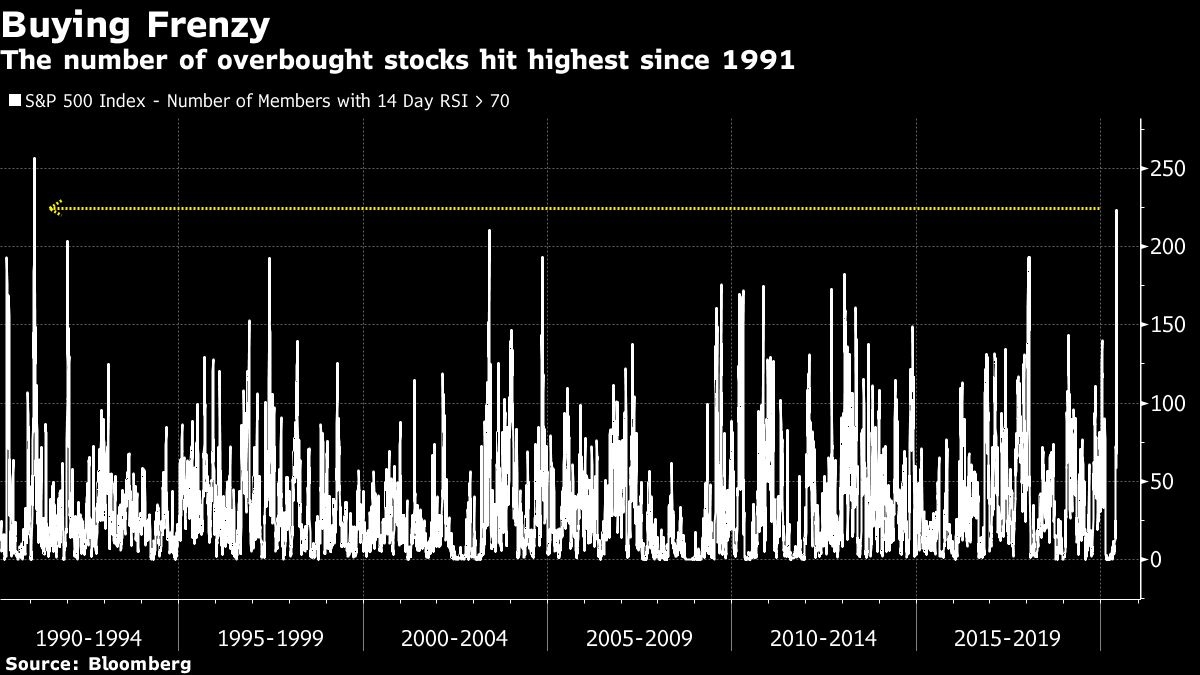 Companies hit hardest in the COVID-19 crash, like airlines and cruise lines, are surging. Next to it all is robust retail buying. The 10 Russell 3000 stocks that saw their popularity rise most on the Robinhood investing app — including American Airlines Group Inc. and Norwegian Cruise Line Holdings Ltd. — rose an average of 93 per cent in the month through Monday. Average daily volume for these stocks has occasionally been 30 times what it was in 2019.

To Jim Bianco, president and founder of Bianco Research LLC, it all comes down to the Fed structuring the market so that everyone always wins.

“That’s why we’re seeing a giant rush of small retail investors and everybody else into the market,” Bianco told Bloomberg Television Wednesday. “When you go into the market, you go to the riskiest end of the market, so you buy bankrupt companies, you buy beaten down airlines, you buy cruise ships, you buy retailers because they will benefit the most from a support system where everything is targeted, and the markets will always go up.”