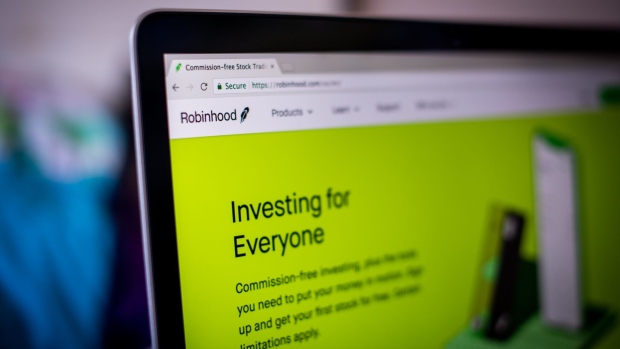 Just as millions of Americans begin receiving US$1,400 stimulus checks from the government, Robinhood Markets is offering some traders bonuses for new deposits.

Under the “Robinhood Cash Rewards” program, some of the trading platform’s users can get account credits ranging from US$10 for a US$200 deposit to US$250 for a deposit of at least US$15,000 over the next two weeks. The offer is being rolled out just weeks after Robinhood's co-founder was grilled by lawmakers for features that critics say entice users to trade excessively.

A spokeswoman for Robinhood said the promotion isn’t connected to the government stimulus program. She added that the firm runs such offers regularly, but declined to specify how often it has done so previously.

Stimulus checks aimed at softening the economic blow of the COVID-19 pandemic are being sent to Americans after President Joe Biden signed his US$1.9 trillion stimulus bill into law last week. While many of the recipients will use the cash to meet basic needs, money is also going to people who can afford to save or invest it.

Speculation has been rising in markets that stocks and cryptocurrencies could be boosted in the wake of the payments, and social media has filled with posts on ways to spend one’s “stimmy.” Last year’s stimulus checks contributed to a blistering surge in U.S. equities and helped lift digital currencies like Bitcoin to record levels. At the same time, Robinhood drew millions of new users to its platform as trading by individual investors boomed during pandemic lockdowns.

“This promotion is not available to the general public,” Robinhood said on its website. “In order to be eligible to receive a cash reward, you must be a direct recipient of the original email from Robinhood.”

Just a few weeks ago, the company rushed to raise billions in new capital, and has since then faced increased scrutiny. In February, lawmakers quizzed co-founder Vlad Tenev about the firm’s business model and the role it plays for more than 13 million retail investors, many of them young and dipping into markets for the first time. One key sticking point: the fact that the company’s revenue increases the more frequently its users trade.

A Feb. 18 Congressional hearing came just months after Massachusetts securities regulators filed a lawsuit accusing Robinhood of exposing users to “unnecessary trading risks.” The complaint said the company is breaking its fiduciary standard to act in the best interest of its users.

Robinhood has shot back, saying that its platform doesn’t encourage excessive trading and that its sleek and simplified user interface merely is a result of listening to the wishes of its users. The company has said repeatedly that it’s filling a crucial role in financial markets by helping a young and diverse group of traders to invest.

Tenev testified that the largest source of Robinhood's revenue is payment for order flow, a system where the brokerage sends users’ trades to financial firms like Citadel Securities, which in turn execute the orders and pay Robinhood for the opportunity. The arrangement is commonplace and disclosed in the brokerage industry, but has proven controversial.

The Menlo Park, California-based brokerage last year took in about US$687 million from such payments, according to data from regulatory filings compiled by Bloomberg Intelligence.