Robinhood Markets Inc. filed for an initial public offering, disclosing it became profitable last year only to have its losses skyrocket in the first quarter amid the so-called meme stock frenzy, in what’s expected to be one of the highest-profile listings the year.

The company, which pitches its trading platform to novice investors, listed the size of the offering as US$100 million, a placeholder that will change when it sets terms for the share sale. Thursday’s registration statement follows Robinhood’s announcement in March that it had filed confidentially to go public.

Robinhood said it generated net income of US$7.45 million on net revenue of US$959 million in 2020, compared with a loss of US$107 million on US$278 million the previous year, according to the filing.

The company’s revenue surged during the first quarter, exceeding US$522 million compared with US$128 million for the same period last year, according to the filing. Its losses rose astronomically, though, from US$53 million for the three months ended March 31, 2020, to US$1.44 billion in the most recent quarter.

That loss was mainly tied to convertible notes and liabilities from its emergency fundraising, when it was rushing to deal with the volatility of trading in GameStop Corp. and other popular stocks. Robinhood gathered more than US$3 billion from investors over a few days

Cryptocurrency trading on Robinhood was booming in the first quarter, with 17 per cent of its total revenue involving transactions related to it. 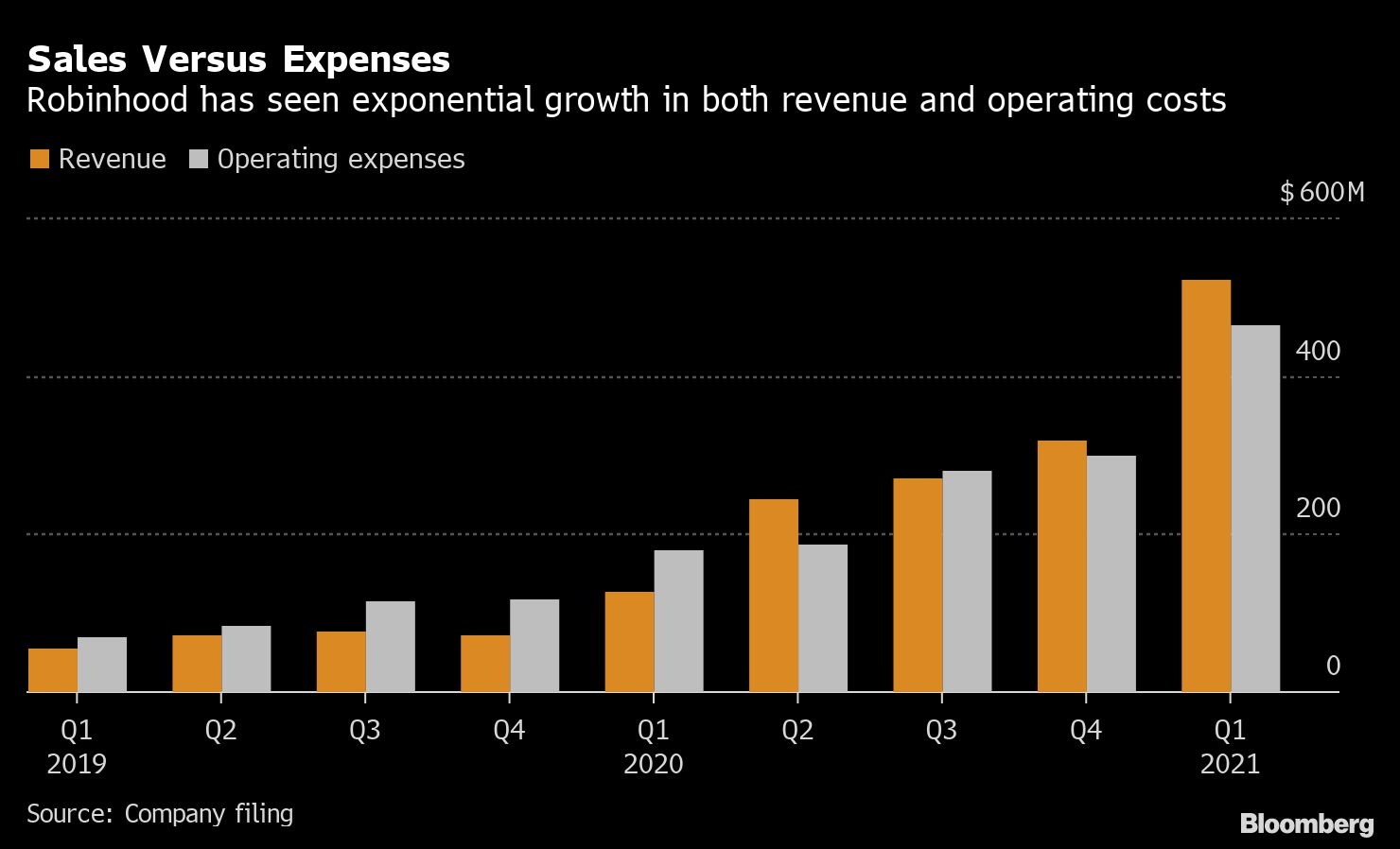 Robinhood’s potential valuation will be more clear when it discloses the number of shares it plans to sell and the proposed price range for them. Bloomberg Intelligence analyst David Ritter has said the company could be worth as much as US$40 billion.

Robinhood’s appeal caught on during the coronavirus pandemic as homebound young people turned to online trading to pass the time and make money. Its monthly active users have more than doubled in the past year, with 17.7 million as of the first quarter, up from 8.6 million in the same period last year.

That increased popularity has led to scrutiny from politicians and regulators, who are focused on the so-called gamification of trading and the company’s role at the center of the meme-stock phenomenon.

Robinhood also had to raise billions of dollars from its backers, at the height of a volatile late January frenzy over stocks like GameStop, that became popular on Reddit forums and trading apps.

The Financial Industry Regulatory Authority imposed a nearly US$70 million fine on Robinhood on Wednesday, a record for the watchdog. Finra alleged Robinhood misled its customers about margin trading, and lapsed in its oversight of technology and approvals for options traders. Robinhood neither admitted nor denied the claims.

Robinhood declares in its filing that its mission is to “democratize finance for all.”

Robinhood was founded by two Stanford alumni Baiju Bhatt and Vlad Tenev who met at the university. Both are sons of immigrants and raised in rural parts of the U.S.

“The next generation of investors is younger and more diverse than ever before, and finance is now as culturally relevant as music and the arts,” Tenev and Bhatt said in a letter to investors.

The Menlo Park, California-based company said in the filing it will reserve 20 per cent to 35 per cent of its Class A shares for its customers.

The company will have two other classes of stock, with Class B shares carrying 10 votes each and Class C shares with no voting rights. All of the Class B shares will be held by executives and directors of the company after IPO, according to the filing.

The listing gives 2021’s IPO market another boost. So far companies, including blank-check firms, have raised more than US$210 billion on U.S. exchanges, the busiest year on record, according to data compiled by Bloomberg. Consumer-facing companies such as Warby Parker Inc., Sweetgreen Inc. and Allbirds Inc. are expected to make their public debuts later this year, Bloomberg News has reported.

Robinhood said in June that new directors would be joining its board including Jon Rubinstein, who helped create the iPod for Apple Inc. and is a director at Amazon.com Inc., Robert Zoellick, the former president of the World Bank and PricewaterhouseCoopers partner Paula Loop.

The company’s credit lines include a US$600 million revolver from banks including JPMorgan Chase & Co., Goldman Sachs Group Inc. and Morgan Stanley, according to data compiled by Bloomberg.

Robinhood’s offering is being led by Goldman Sachs and JPMorgan. Its shares are expected to trade on the Nasdaq Stock Market under the symbol HOOD.