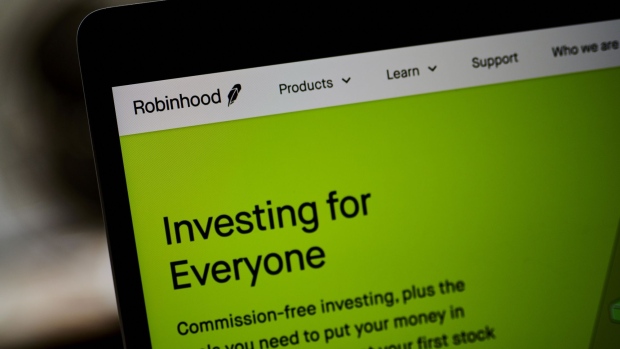 The Robinhood website home screen on a laptop computer arranged in the Brooklyn borough of New York, U.S., on Saturday, Dec. 19, 2020. Robinhood Markets will pay $65 million to settle allegations that it failed to properly inform clients it sold their stock orders to high-frequency traders and other firms, putting a major compliance headache behind the brokerage even as new ones emerge. Photographer: Bloomberg/Bloomberg , Photographer: Bloomberg/Bloomberg

(Bloomberg) -- Robinhood Markets Inc. is seeking to boost its bank loans ahead of an initial public offering, according to people familiar with the matter.

The company, which pitches its trading platform to novice investors, has been holding talks with lenders about adding to its revolving credit lines, said the people, who asked to not be identified because the matter isn’t public. It isn’t clear how much the company is seeking.

Companies often secure a credit line before going public and this will make sure Robinhood has a strong capital and liquidity position, one of the people said.

The move would come several months after the firm raised debt and $3.4 billion in equity to comply with a margin call from the industry’s clearinghouse, a consequence of wild swings in stocks including video game retailer GameStop Corp.

A representative for Menlo Park, California-based Robinhood declined to comment.

The company’s credit lines include a $600 million revolver from banks including JPMorgan Chase & Co., Goldman Sachs Group Inc. and Morgan Stanley, according to data compiled by Bloomberg.

Robinhood said last month that it had filed confidentially for what could be one of the most closely watched IPOs of the year.

While the company’s easy-to-use trading app became immensely popular with young people during the pandemic, it has drawn scrutiny from regulators and politicians for its role in the so-called meme-stock frenzy that included GameStop.