Robinhood Markets Inc. jumped a whopping 50 per cent on Wednesday after a wave of individual investors joined the likes of Cathie Wood to pile on the zero-fee trading platform.

The stock traded as high as US$85 in New York before trimming gains to close at US$70.39 as the volatility triggered at least three trading halts. The frenzied share buying pushed the company’s market value to a peak of US$65 billion from US$29.1 billion after its debut on Nasdaq last week. 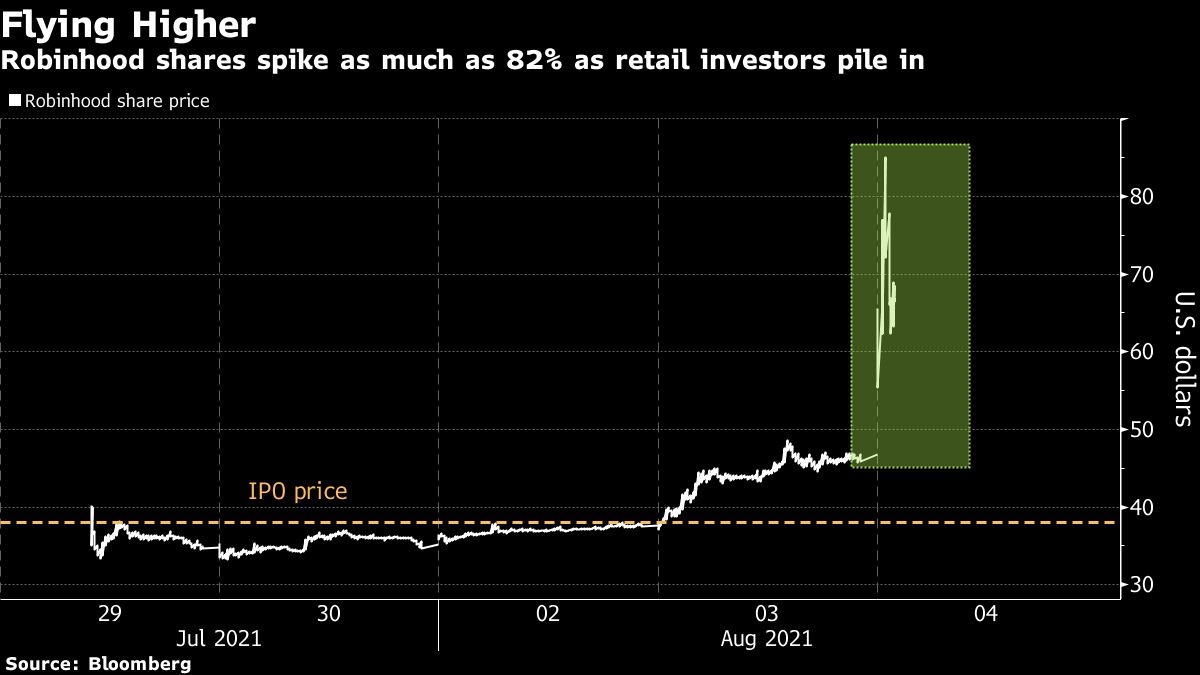 ‘We’ve seen this movie before and this pump and dump of Robinhood will not end well for many traders,” said Ed Moya, senior market analyst at Oanda Corp. “Robinhood’s revenue streams will come into question once the government applies rules to payment of order flow.”

Retail investors’ participation took off in the past couple of sessions after a lukewarm reception. They bought a net US$19.4 million worth of Robinhood shares on Tuesday to make it the sixth-most-purchased stock and 11th-most-traded security on retail platforms, according to data compiled by Vanda Securities Pte.

Total retail volume on Tuesday surged about 10-fold from the previous day, the data show. In the first three hours of Wednesday’s session more than 100 million shares changed hands, more than five-times what was seen in recent days. 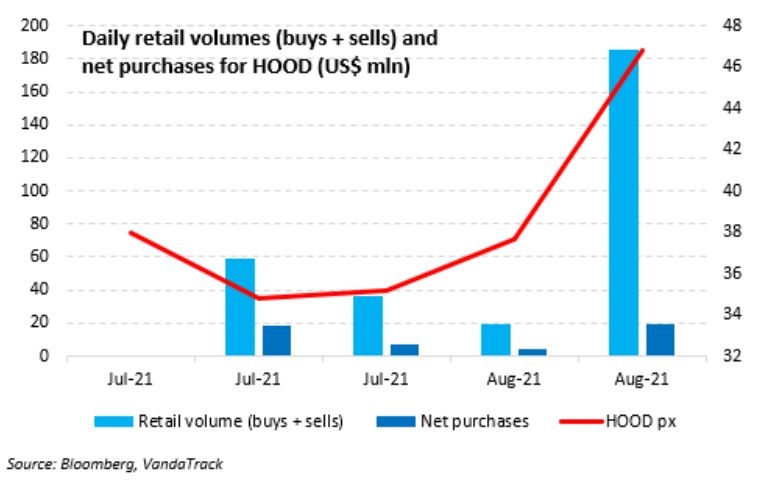 Trader chatrooms, such as those on StockTwits, and Twitter feeds were aflame with mentions of Robinhood’s surge. Users compared the surge to the massive rallies staged by so-called meme stocks like GameStop Corp. and AMC Entertainment Holdings Inc. earlier this year.

The stock was the most traded company on Fidelity’s platform with more than 32,000 buy orders coming from customers. That’s almost double the number of buy orders seen for AMC Entertainment which saw the second largest number of buys.

$HOOD is making $GME look like a club player pic.twitter.com/JtmUTiRaXK

The retail investors trading boost came alongside Ark Investment Management’s move to increase stake in the company. Ark Fintech Innovation ETF bought 89,622 Robinhood shares in the previous session as they surged 24 per cent to close above their IPO price for the first time.

“This spike in the share price doesn’t change our view of shaky fundamentals and compounds the concern about order-flow payment revenue through 2022, after a 34 per cent drop in 2Q and a crypto-trading bump that’s unlikely to repeat in 3Q. Our analysis still points to a mid-US$30 baseline share price.”

Some traders pointed out that partial options trading data for the company were coming through for the first time. The most actively traded options on Robinhood in Wednesday’s session were US$70 calls that expire on August 20. A company can not have options traded on its stock until at least three days after its IPO, and options activity may increase share price volatility.

Individual investors “love using options” which has likely gotten them more involved in Robinhood today, Matt Maley, Chief Market Strategist at Miller Tabak & Co., said. “When they buy these options, the dealer has to hedge themselves by buying the stock. When they buy a lot of call options, the whole thing feeds on itself for a while.”