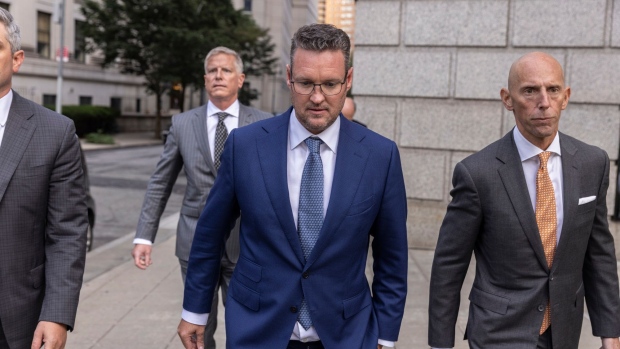 Trevor Milton, founder of Nikola Corp., exits court in New York, US, on Monday, Sept. 12, 2022. Milton, who enticed auto-industry leaders and investors with his promise for a revolution in electric trucks, faces a securities-fraud trial beginning this week on allegations that he lied about his company's development of environmentally friendly technology. , Bloomberg

(Bloomberg) -- An investor who bought into the heady promises of Nikola Corp. founder Trevor Milton in 2020 told the jury in Milton’s criminal fraud trial that he shunned the electric truck maker’s regulatory filings as long and unilluminating.

“I always listen to the CEOs of companies,” Marc Schonberger, a self-described “midlevel investor” from Fort Lauderdale, Florida, testified on Thursday about Milton, who was Nikola’s executive chairman at the time. “They have a fiduciary responsibility to tell you kind of what’s going on and be truthful and honest, so I relied on that.”

By contrast, he told the jurors in federal court in Manhattan, he didn’t have much use for regulatory filings.

“They’re just lengthy and don’t really give you a relevant description of what would be a reason to invest or not invest,” said Schonberger, who has used the Robinhood trading platform that became famous in the heyday of meme stocks and SPACs, among other platforms.

Schonberger, who told the jury he drives a Tesla, said he bought $20,000 worth of Nikola stock on Sept. 8, 2020, when Nikola announced that General Motors Co. had taken a $2 billion equity stake in the company, and sold it two days later after a short-seller put out an excoriating report. He said he felt “deceived” and took a $4,000 loss.

Prosecutors allege Milton misled investors about the company’s business prospects, including truck orders and Nikola’s ability to produce hydrogen fuel. His lawyers argue he was just echoing Nikola’s marketing and never said anything he didn’t believe to be true. They say potential investors had access to important, accurate information through the company’s website and other publicly available documents -- including regulatory filings.