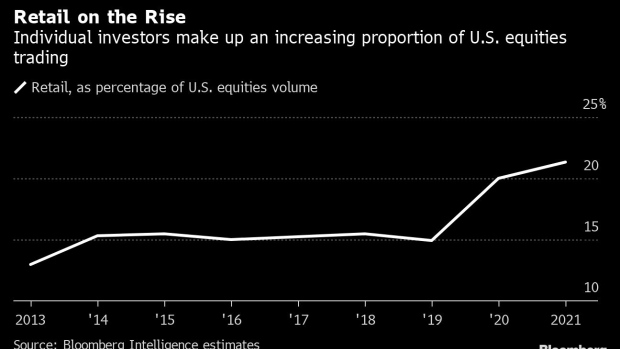 (Bloomberg) -- Among the many complaints about Robinhood Markets Inc. in the pandemic era, one attack seemed to stick: the brokerage app was making trading too easy and too fun. For the company’s critics, the bad news is that there’s now a bevy of firms offering even more gimmicks and giveaways to would-be investors.

In recent months, even as Robinhood stripped away its famous confetti graphic and faced a congressional hearing, its smaller rivals leaned into features such as trading leader boards, prizes and lottery-style drawings. The next generation of app-based brokers have embraced the engrossing traits of social media that Robinhood pioneered -- though in their case, it’s not about hitting ‘Like’ or retweet, but instead buying and selling shares, options and cryptocurrencies.

The U.S. Securities and Exchange Commission has called out the downsides of reward systems and behavioral nudges in the industry. The agency is now reviewing public feedback about whether the so-called gamification of trading is bad for investors, akin to the addictive habits spurred by gambling.

But the burgeoning popularity of apps such as Robinhood, Webull Financial and SoFi Technologies Inc. presents a challenge, as any changes would hit billions of dollars of trades. And no matter how controversial some practices are, defining the boundaries of what’s acceptable could be slippery.

“There’s no value in writing rules that say gamification of investing is illegal,” said Kevin Werbach, a business professor at the University of Pennsylvania’s Wharton School. “With investing, there’s already a score-keeping mechanism, which is the balance in your account, so it’s not inherently illegitimate to map on top of that a game-based motivational layer.”

Beyond creating a game-like environment, some online brokerages dangle prizes such as iPads and Tesla Inc. shares. One even has a “stock party” website where users can fire off confetti while waiting for share giveaways.

It’s an approach that’s been wildly successful. The majority of the more than 10 million first-time brokerage accounts opened in the first half of the year were through app-based trading platforms, according to estimates by Devin Ryan, director of financial technology research at JMP Securities.

App-based trading typically appeals to a younger crowd. At Robinhood, the median customer was 31 years old, and the average account size was $5,000 as of February. While larger brokerages don’t provide directly comparable data, at Charles Schwab Corp., the average retail customer’s age was about 49 at the end of the second quarter, and their average household assets totaled roughly $235,000.

Read more: The Everything Crackdown Is Coming

Some academics express concern compulsive trading is on the rise.

“I’ve seen patients for whom the lure of trading is very similar to other addictive behaviors, like more traditional gambling,” said Anna Lembke, professor of addiction medicine at Stanford University. “People come in solely for that problem.”

Webull traders can spin a virtual Wheel of Fortune for a chance at Tesla stock. There are other “awesome” prizes, including a $5,000 gift card and Apple products such as an iPad. In a previous promotion, Webull advertised $2,500 toward a vacation.

SoFi dangles as much as $1,000 in free stocks, accompanied by an illustration of a pile of wrapped gifts. While investing isn’t a game or a path to getting rich quick, “we offer incentives so novice investors can learn that investing is for them, too,” a spokeswoman said.

Stash Financial’s stock party, meanwhile, “is designed to teach the importance of diversification via exposure to new investments,” the company said in an emailed statement.

Robinhood, which is also being investigated by authorities in Massachusetts, has rebuffed the gamification claims. The firm told the SEC that it doesn’t use trading competitions or the other, more aggressive game-like features of its peers. It also warned that more regulation of brokerage communications with their customers could violate the First Amendment.

That hasn’t persuaded critics, some of whom say the SEC should get involved.

“Retail investors bring a separate set of issues,” said Charles Jones, a finance professor at Columbia Business School. “Some of them need to be protected from themselves.”

January’s meme-stock frenzy -- when names including GameStop Corp. and AMC Entertainment Holdings Inc. soared as retail investors piled into shares -- showed how treating financial markets in a game-like manner can have larger ripple effects, he said. “That emphasizes the importance of doing this review.”

For Robby Scharf, the score-keeping was made clear one day when, midway through a grocery shop, he checked his bank account and realized he couldn’t pay for a week’s worth of food because all his cash was tied up in stocks on Robinhood.

Scharf, a student at Western Oregon University, started using the app in February 2020 after a friend invited him to enter a promotion for a free stock worth about $5. By the fall, he said he started using Robinhood every day, multiple times a day.

“It developed quickly from, ‘I have this one stock that I don’t do anything with’ to ‘I have 90% of my total assets on this Earth in this app,’” he said. He pulled most of his money out in October 2020 and he checks the site once a day, down from about a dozen times at his most active. He’s earned $100 since joining.