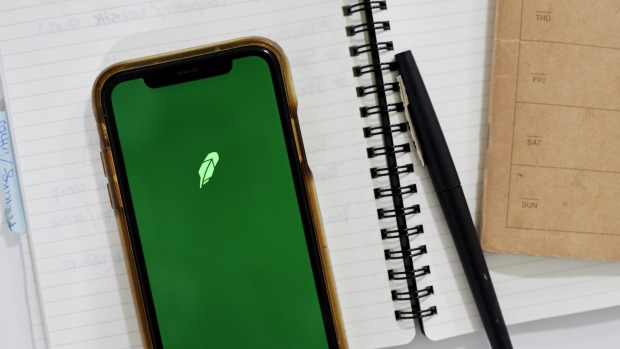 (Bloomberg) -- Robinhood Markets Inc. is exploring new features that would let customers invest spare change and better protect against volatility in cryptocurrency trading, according to code hidden inside a test version of the company’s iPhone app.

Robinhood is developing an option called “round up investments” that will allow users to invest their spare change in specific stocks, according to the code, which was part of a version of the app distributed to beta testers earlier this month. The code also shows that the company is exploring a rewards program that will give bonuses to those using the round-up feature.

Investing spare change has become an increasingly popular strategy for new stock traders and is a key piece of competing apps such as Acorns, Chime and Wealthsimple. The code in the Robinhood app doesn’t indicate where the spare change will come from, but other apps typically connect to a debit or credit card. They round up purchases to the nearest dollar and automatically invest that difference. For example, if a user spends $3.75 on a cup of coffee, 25 cents will be put toward a chosen stock.

Robinhood plans to make its public debut this week, with its shares set to start trading on Thursday. The company is looking to raise about $2 billion in its initial public offering, with a valuation of up to $35 billion. Robinhood is challenging IPO conventions in a variety of ways, including by setting aside up to about a third of its shares for its own users -- in what it expects to be one of the largest-ever IPO allocations to retail investors.

On Saturday during a livestreamed roadshow -- an event typically held in private for institutional investors -- Robinhood executives answered customer questions about how the company might grow in the future.

“There is more we can do with direct deposit and debit cards, particularly given the opportunity to connect rewards with our brokerage and crypto offerings,” Chief Financial Officer Jason Warnick said in response to a question on the firm’s growth strategy.

The code was discovered by iOS developer Steve Moser. Work on the features is no guarantee that the functionality will ultimately be released. A Robinhood spokeswoman declined to comment on the findings.

Other app features have been discovered in code before they’ve been announced. Bloomberg News reported on code in Square Inc.’s app in May that revealed plans for business checking and savings accounts. The new offerings were officially unveiled this month. And evidence of Netflix Inc.’s push into video games appeared in its app before the streaming service disclosed the plans.

Besides spare-change investing, the code also indicates that Robinhood is working to better guard against the vagaries of the crypto market through a feature called “price volatility protection.”

“To protect your orders against price volatility, we may sometimes skip your recurring orders or buy less than your chosen amount,” a message in the code reads. The code says the app will let a customer know when this happens and will never buy more than a user’s chosen amount.

Robinhood, based in Menlo Park, California, struggled with turbulence in virtual currency trading this year. As the price of Dogecoin boomed and crashed, Robinhood’s crypto trading platform suffered an outage.

Still, investors have proven eager to use Robinhood to trade virtual currencies. The company brought in about $87.6 million, or about 17% of its first-quarter revenue, from cryptocurrency transactions, up from just 3% in the same period in 2020.

Chief Executive Officer Vlad Tenev said during the company’s roadshow that Robinhood is working on building up its crypto business. Without specifically mentioning a volatility feature, he said that introducing options like crypto wallets will be a priority at the firm.

“We’ve been doing a lot of work behind the scenes to provide our crypto customers with the functionality that they’ve been asking for,” Tenev said. “We want to introduce new features safely, and there’s a lot of items we have to get right from the start. For instance, making sure we get security right is a top priority.”