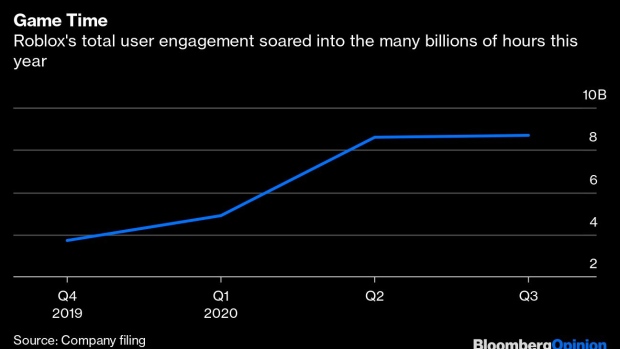 (Bloomberg Opinion) -- Forget Fortnite or Minecraft for that matter. Parents everywhere know there’s a new game in town that is rapidly gobbling up all of their kids’ free time and attention: Roblox.

The company behind this pop culture phenomenon filed Thursday with the U.S. Securities and Exchange Commission to go public and also disclosed a bigger aspiration that is the ultimate dream of gamers and science-fiction aficionados: enabling a life-like virtual playground universe for billions of people. Given the extent of Roblox Corp.’s progress this year, on top of its widening lead over competitors, I wouldn’t bet against it.

The San Mateo, California-based company’s metrics are impressive. Its prospectus shows Roblox’s bookings — the gaming industry’s primary measure of sales — soared by 171% in the first nine months of 2020 to $1.24 billion from $458 million the prior year. Daily users grew by about 80% to more than 30 million in the period. And perhaps most impressive, each of those gamers — the majority of whom are 12 and younger — spent an average of 2.6 hours a day on Roblox.

It’s a good time to be in video gaming. The entire industry has thrived amid the pandemic because of lockdown orders and a scarcity of in-home entertainment options. But these Roblox numbers significantly surpass its peers and will go far toward persuading investors to give the company the $1 billion or more it’s hoping to raise to attain its ambitions.

From the dawn of interactive entertainment, gamers have salivated over the prospect of living and socializing inside a fully realized world, using life-like customized digital characters. Roblox is aiming at this goal. The company says it plans to invest aggressively to enable higher-fidelity avatars and improve its visual and audio capabilities. “As we continue to improve the Roblox Platform, these experiences will become increasingly engaging and indistinguishable from the real world,” the company wrote in the filing, while adding its mission is to serve “billions of users.”

That’s quite ambitious. In reality, though, Roblox is doing similar things today, just at a lower fidelity. Its current platform gives users the tools to create gaming worlds and virtual items such as clothing and accessories for characters. It’s only a matter of time before the industry develops the computing power and graphics-rendering technologies to enable a truly real-world experience. And remember, Facebook Inc. already serves billions of users. So it’s not totally out of the realm of possibility for Roblox to get there some day too.

In the meantime, Roblox is building an increasingly unassailable lead in the virtual world market. More than any other gaming company, it has figured out how to maintain and build a self-sustaining ecosystem of creators and users. As the virtuous feedback loop between the two sides accelerates — wherein a large population attracts high-quality content creation and vice versa — it will get more difficult for rivals to catch up. Already, the numbers are staggering: To date, there are nearly 7 million active developers who have made more than 18 million gaming experiences for Roblox, including millions of virtual items that gamers can use to personalize their characters. No other platform comes close.

Money also talks. Nearly 1 million creators have earned “Robux,” the platform’s virtual currency that can be converted into U.S. dollars, over the past year; 250 of them made $100,000 or more. And there’s scope for bigger payoffs. While the majority of Roblox’s current users are of the younger set, they’ll be growing up soon enough, and the company says content spending dramatically improves for users older than 13. Its younger base is a big asset.

Unlike other competitors that generate large portions of their revenue selling and making their own game content, Roblox’s entire business model depends on enabling its users to create immersive virtual worlds. So far, it’s been a winning strategy. And it’s got a lot more runway.