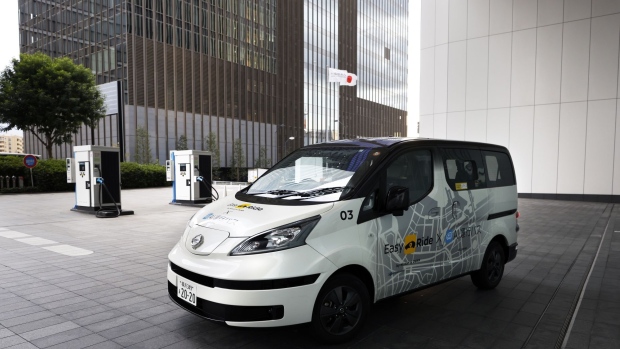 A safety driver behind the wheel of a Nissan robotaxi. , Bloomberg

(Bloomberg) -- Nissan Motor Co. is carrying out Japan’s largest demonstration to date of autonomous vehicles in an area to the south of Tokyo, as the automaker moves toward rolling out a commercial robotaxi service.

Although regulations and the need for further technology improvements mean a full-scale launch is still some years away, Nissan has been testing the self-driving taxi service in Yokohama, near its corporate headquarters. Passengers can book rides via a smartphone app that covers some 650 routes and embark and disembark from 23 points around the city.

For now, the autonomous taxis have operators sitting ready to take over in case the vehicles’ various sensors encounter a situation that requires human assistance. The goal is to eventually have such “safety drivers” monitor a fleet of robotaxis remotely. In this way, savings on driver fees could lead to lower fares versus conventional taxis, according to Nissan.

The robotaxi service is one part of Nissan’s “Ambition 2030” long-term strategy announced earlier this week. Also included are plans to equip over 2.5 million vehicles with its “ProPilot” semi-autonomous driving system and spend some 2 trillion yen ($17.7 billion) on electrifying more of its fleet.

The automaker also envisions the robotaxi service addressing a shortage of public transport drivers. With Japan’s population aging rapidly and declining, elderly people’s inability to get around, especially in rural areas, has emerged as a growing social issue. Nissan has been testing similar autonomous shuttles in Namie, a town in Fukushima prefecture that was damaged and temporarily evacuated during Japan’s 2011 earthquake and tsunami.

So far, the robotaxi service has proved popular among test passengers, with one middle-aged rider booking taxis in Yokohama 38 times in the recent 29-day testing period, according to Jun Watanabe, a manager in Nissan’s business partnership development division. Other users however reckon they’re still better when it comes to navigating traffic jams, he said.

“It was a bit of a shock to have cars driving themselves,” especially for elderly passengers, Watanabe said. But they started to visibly relax after a couple rounds in the back seat, he said. The cars’ cameras even picked up some beginning to unfurl newspapers or browse their smartphones on their second or third time around, he added.