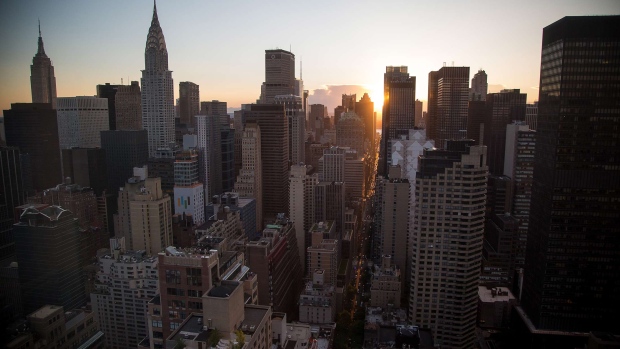 A view of midtown is seen from the penthouse apartment at the 50 United Nations Plaza building in New York, U.S., on Tuesday, June 7, 2016. , Bloomberg via Getty Images

The Rockefeller Foundation will end funding and dismiss the staff at its 100 Resilient Cities program, the largest privately funded climate-adaptation initiative in the U.S., the foundation announced Monday.

Rockefeller will shift some of its resilience funding to the Atlantic Council, a Washington-based think tank, with a US$30 million grant to the council’s Adrienne Arsht Center for Resilience, the foundation said in a press release. Rockefeller also announced a US$12 million grant “to allow continued support and transition time to the 100 Resilient Cities network through much of 2019.”

“With a new grant in place to the Atlantic Council and new structures within the Rockefeller Foundation to carry forward its resilience work, the grant that funds 100RC will conclude in 2019,” the foundation said in its release.

The 100 Resilient Cities program was started by Rockefeller in 2013 to help U.S. cities -- including Boston, Miami, New York and Los Angeles -- as well as cities overseas prepare for threats related to climate change. Bloomberg News reported last week that the foundation was planning to disband the program.

A spokesman for Rockefeller, Matt Herrick, said the 100 Resilience Cities program isn’t shutting down. Instead, he said, it is “transitioning” to other offices, including the foundation’s Jobs and Economic Opportunities initiative.

“The work will continue in one form or another through 2019,” he said.

Andrew Brenner, a spokesman for 100 Resilient Cities, said by email that Monday was “a tough day.”

“This morning our staff of 86 was informed that their last day would be July 31, 2019 -- myself included -- with severance following," Brenner said by email. He said he believed that the change would result in the closure of the organization’s offices in New York City, Mexico City, London and Singapore.

The shift of the 100 Resilient Cities program comes as U.S. cities face increasing pressure from climate change, especially following a string of major natural disasters over the past two years. And it coincides with a pullback in climate adaptation work by the Trump administration, which has reversed policies designed to prepare communities for global warming.

The program, to which Rockefeller provided US$164 million in grant money, pays for cities to hire “chief resilience officers’’ who develop and then implement strategies for coping with climate change. The initiative also gives cities access to the organization’s staff and external consultants, as well as to a global network of cities trying to grapple with similar problems.

For participating cities whose chief resilience officers have not yet completed their initial two-year contracts, the foundation will continue to pay those officers’ salaries for the remainder of their two-year commitments, Herrick said.

The foundation described its decision as “a new phase” of its leadership on climate and resilience, and said the grant to the Atlantic Council “establishes a new platform for this important work to evolve and continue.”

Asked why the foundation was closing the program, Herrick said that 100 Resilient Cities had mostly achieved its objectives.

“The history of the foundation, when it begins programs or initiatives, is that those do not carry forward in perpetuity,” Herrick said in a phone interview Monday. “We anticipate a successful conclusion to the goals set by 100 Resilient Cities.”

As for the network that the program was intended to create, so that cities could help each other deal with climate change, that network “will continue in some capacity or another,” Herrick said.

“Jobs within 100RC will end on July 31,” Herrick said. “We will do everything we can to help 100RC staff as they explore new opportunities. They are amazing colleagues and their work has been so important.”

The 100 Resilient Cities initiative was created by Judith Rodin, who was president of Rockefeller from 2005 to 2017. The foundation chose Raj Shah, who had run the U.S. Agency for International Development during the Obama administration, to succeed her.

“I am immensely proud of the work achieved by 100 Resilient Cities to integrate resilience in cities and communities around the world,” Shah said in Monday’s press release. “The Foundation is committed to working with cities and CROs to ensure this work is institutionalized.”