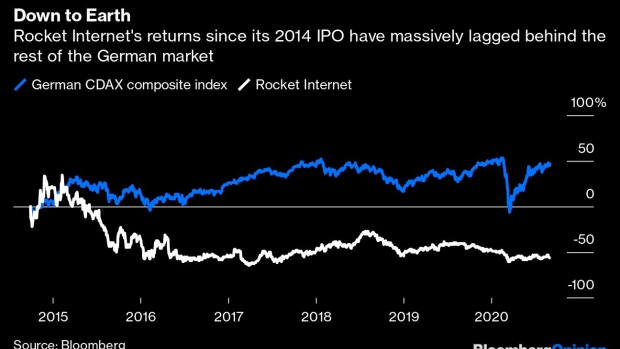 You’d doubtless feel hard done by. Yet Oliver Samwer, chief executive officer and founder of Germany’s Rocket Internet SE, is making a similar proposition to his fellow shareholders. He wants to take the web-investment company private again, and he’s offering to buy out other investors in a way that would let him and his family keep that nice little stash in the trunk.

Samwer and his brothers own 45% of Rocket, but they’d like to own all of it so they want to use the company’s cash to acquire the rest of the shares. First off, they’re doing a 223 million-euro share buyback that will push their ownership above the 50% mark, giving them control of Rocket. Then, they’re planning to use another billion euros or so to buy the rest of the stock.

Rocket has 2.6 billion euros ($3.1 billion) of cash, and about half of that will be used to buy out the non-Samwer shareholders. That doesn’t seem too egregious given the current ownership split (if you set aside the disappointing fact that the company is only valued by the market at the sum of its cash holdings). But the company also has 1 billion euros of tech investments — the equivalent of that money in the trunk — which it would get to keep.

That gives minority shareholders every right to be seriously peeved. A dollar invested in Rocket when it first sold shares publicly in 2014 would be worth just 45 cents today. The Samwers are now offering investors even less than that to cash out, without any chance of benefiting from the growth of the company’s remaining investments. The 18.57 euro-per-share buyout offer is lower than the current market price.

One might expect Rocket Chairman Marcus Englert to do a better job of making sure management is acting in the best interests of all stakeholders. Investors are under no obligation to sell their stock, but the initial buyback means the Samwers are about to get control of the company anyway, even if no one tenders their shares for the full takeover. That could let the brothers — who made their initial fortune by building a clone of eBay Inc. and then selling it to the U.S. company — hold the remaining shareholders to ransom.

In fairness, many of these minority investors will have bought the shares knowing they were in a weak position: Samwer already has de facto control  through his current 45% holding. But this is still pretty brazen.

It again shows the weaknesses in German corporate governance, as with Wirecard AG’s collapse. The country is desperate for tech success stories, but it’s not exactly winning hearts and minds.