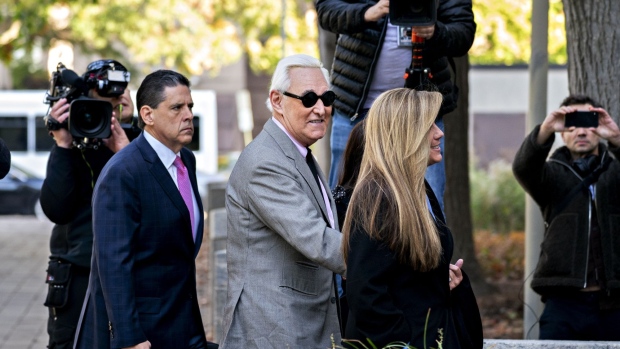 Roger Stone, the longtime Republican operative and Donald Trump associate, was sentenced to three years and four months in prison for lying to Congress and tampering with a witness to protect the president.

The sentence caps a week of political turmoil that followed Trump’s Feb. 11 criticism of the original recommendation that his friend receive a prison term of as many as nine years. The four prosecutors in the case all stepped down after the Justice Department said it was withdrawing their proposal and submitting a new, more lenient one. The sentence is in line with the lower, three-to-four year range recommended in a revised filing.

Stone was not taken into custody, and it’s unclear if he will ever serve any part of his sentence. Trump has hinted that he may pardon Stone, though he ruled out immediate action Thursday, saying he wanted “the process to be played out.” At the same time, he reiterated his belief that Stone’s prosecution was unfair and politically motivated, claims U.S. District Judge Amy Berman Jackson explicitly rejected in her sentencing.

But though she praised the original prosecutors in the case, Jackson said the range of seven-to-nine years they recommended was too long.

As the judge pronounced her sentence, Stone stood emotionless. After she concluded, he turned, huddled with his lawyers, nodding and shaking their hands. “I have nothing to say. Period. Thank you,” Stone said as he left the courtroom, smiling.

In addition to prison time, Jackson also imposed a US$20,000 fine on Stone. She told him he could remain free while he files an appeal and she considers his motion for a new trial.

The outcome is sure to be picked apart by partisans looking for any sign that Jackson, whom Trump has targeted on Twitter, either caved to the president or pushed back against him by imposing an even tougher sentence. Stone declined to speak at his sentencing, but his lawyer asked that Stone be given no time for the charges on which he was convicted in November.

“I don’t think this is a victory for Roger Stone, or it reflects that Judge Jackson was cowed by the president,” said Jeremy Temkin, a former federal prosecutor. “She gave him a heavy sentence, and one that she obviously feels he deserved. She presided over the case, from the time of the indictment to the sentencing, and she knows it better than anyone. You have to give her more credit for knowing what the case is about rather than just reading the president’s tweets.”

The government’s reversal on its sentencing recommendation prompted Democratic lawmakers to accuse Trump of using the Justice Department to do his bidding. It also set up a rare clash between the president and his attorney general, William Barr, who complained in an ABC News interview that Trump’s comments were harming the public perception of the Justice Department as impartial.

At the sentencing Thursday, Justice Department lawyer John Crabb apologized to the judge for the “confusion” caused by the withdrawal of the original prosecutors, whom he defended as acting “in good faith.” He said there had been a miscommunication within the department over “what the appropriate filing should be.”

Asking Jackson to impose a tough sentence “without fear, favor or political influence,” Crabb said: “This prosecution is righteous.”

Stone, who is planning to appeal his conviction, has also filed a sealed request for a new trial. Details of the motion aren’t public, but Trump and other Republicans have claimed the jury foreperson was a Democrat biased against Stone. His earlier request for a new trial alleging bias by a different juror was denied by Jackson.

Speculation that Trump will pardon Stone has also swelled since the president issued a slate of high-profile clemencies Tuesday to several well-connected individuals convicted of white-collar crimes. Since his tweet denouncing the original sentencing recommendation for Stone as a “miscarriage of justice,” Trump has continued to criticize the case, including during the sentencing hearing.

“They say Roger Stone lied to Congress.” @CNN OH, I see, but so did Comey (and he also leaked classified information, for which almost everyone, other than Crooked Hillary Clinton, goes to jail for a long time), and so did Andy McCabe, who also lied to the FBI! FAIRNESS?

“It should go without saying, but to pardon Stone when his crimes were committed to protect Trump would be a breathtaking act of corruption,” Representative Adam Schiff, the California Democrat who led the recent impeachment case against the president, said in a statement calling Stone’s sentence “justified.”

Speaking at an event in Las Vegas after the sentencing, Trump said he wasn’t “going to do anything in terms of the great powers bestowed upon the president of the United States.” He said he believed Stone had “a very good chance of exoneration” at a new trial, because of the “tainted” jury who convicted him.

Stone was the last person charged during Special Counsel Robert Mueller’s 22-month investigation of Russian interference in the 2016 election. The case against him included evidence that Trump knew about a plan by WikiLeaks to release emails damaging to his Democratic rival, Hillary Clinton, that U.S. intelligence believes were hacked by Russia. Stone lied to Congress to protect the president, prosecutors said.

A federal jury in November found Stone guilty on all seven counts against him. Others in Trump’s circle who have been convicted or pleaded guilty include his 2016 campaign chairman, Paul Manafort; his deputy campaign chairman Rick Gates; his first national security adviser, Mike Flynn; and his former personal lawyer, Michael Cohen. Manafort is serving a seven-and-a-half-year sentence.

Flynn’s sentencing has been delayed as he seeks to withdraw his guilty plea for lying to the Federal Bureau of Investigation about his contacts with the Russian ambassador. If the sentencing proceeds, it could set up another clash between Trump, the Justice Department and Democrats.

The charges against Stone stemmed from his September 2017 testimony before the House Intelligence Committee, which was also probing Russian meddling.

Stone was accused of withholding from the congressional panel evidence of his conversations with two possible intermediaries with WikiLeaks -- Randy Credico, a comedian and talk show host, and the conservative author and conspiracy theorist Jerome Corsi. Each of the two had communicated with WikiLeaks, the U.S. said, but Corsi was Stone’s real liaison.

Jackson said she factored into Stone’s sentence his “intolerable” social media activity during his trial. Last year she issued two gag orders barring him from Facebook, Instagram and Twitter, where he had frequently posted comments critical of the Mueller investigation and promoting right-wing conspiracy theories. Stone apologized for one post that included an altered picture of Jackson herself with a pair of crosshairs next to her head.

The U.S. also pursued Stone’s contacts with the Trump campaign. Gates, the 2016 deputy chairman, testified for prosecutors that, during the campaign, he heard Stone telling Trump over the phone that WikiLeaks planned future releases of emails damaging to Clinton. Trump said in a written response to Mueller that he didn’t recall any such conversations.

Prosecutors summoned Steve Bannon, the chief executive of Trump’s campaign, to tell jurors that he viewed Stone as the campaign’s “access point” to WikiLeaks and its trove of stolen documents. Bannon said Stone bragged of his relationship with WikiLeaks and its founder, Julian Assange.

At a Wednesday hearing in London, lawyers for Assange claimed he was offered a pardon by Trump if he “played ball” over the 2016 emails. Assange is fighting extradition to the U.S. over charges relating to Wikileaks’ publication in 2010 and 2011 of State Department cables and other classified documents passed to him by Chelsea Manning,

The White House denied the story on Wednesday as “a total lie.”