It should be a crowning moment for Edward Rogers, the chairman of Rogers’ board, and his hand-picked CEO, Tony Staffieri. Instead, the deal looks shaky, customers are livid, politicians annoyed, regulators suspicious, and Staffieri finds himself on a whirlwind apology tour, frantically trying to appease everyone.

Traders are increasingly skeptical the $20 billion (US$15.4 billion) deal will close by the July 31 deadline, if at all. They’ve been ratcheting up bets in both the stock and bond markets that it will be delayed or fall apart. Shaw shares closed last week at $34.70, implying nearly 17 per cent upside if the deal does happen at Rogers’ $40.50 offer price. That’s close to the steepest discount in a year.

Investors, meanwhile, are bidding up Rogers debt in anticipation the debt-heavy deal might collapse. A 30-year bond issued by the company in March to help finance the acquisition ended last week at a yield of 1.98 percentage points above benchmark government bonds, down from 2.4 percentage points in late May. The price implies a 44 per cent chance that the deal won’t be completed this year, according to Bloomberg Intelligence estimates. 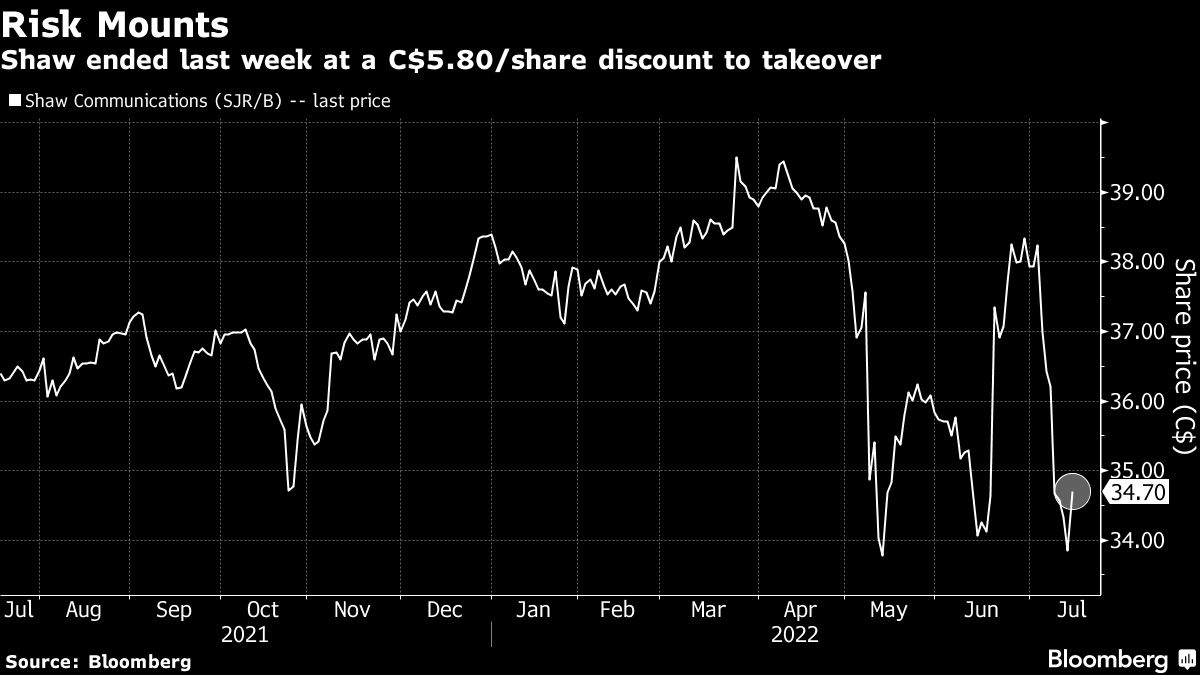 “We remain committed to that transaction, but today I really want to focus on what we’re doing about our network issue,” Staffieri said last week on BNN Bloomberg Television.

That “network issue” is one of the worst public-relations disasters the Toronto-based company has suffered in years. More than 10 million Canadians lost their wireless and internet connections when the Rogers network failed on July 8. Some were unable to even call 911.

Payment systems went down, forcing businesses to do cash-only sales, and events were postponed, including the launch of The Weeknd’s world tour in Toronto, which was to be held at a stadium owned by Rogers.

The Shaw takeover was designed to improve Rogers’ wireless coverage across western Canada, extend its cable business and give it financial heft to compete against larger rival BCE Inc. But its network woes may have handed a stronger argument to those who say the deal should be denied because it will concentrate too much of the nation’s telecommunications infrastructure in one company.

Staffieri, installed as chief executive officer after a vicious internal feud among the children of founder Ted Rogers, has been left to count the cost, estimated by one analyst at a minimum of C$160 million, and to give repeated public apologies. It’s an awkward role for a man who spent nearly a decade as Rogers’ chief financial officer, with little public profile outside the financial community.

Meanwhile, the company has been battered in Ottawa. Industry Minister Francois-Philippe Champagne, whose department has the final decision on the Shaw deal, called the network problem “unacceptable” and ordered an investigation of the incident. He also called Staffieri and other telecom executives to a meeting at which he gave them 60 days to come up with a better system for helping each other during network failures.

This is just a first step. Canadians deserve more from their providers in terms of quality and reliability of service and I will ensure they meet the high standard that Canadians expect, including improving competition, innovation and affordability.

Before it gets to Champagne, though, Rogers and Shaw have to get through the Competition Bureau, Canada’s antitrust body, which has sued to block the deal on the grounds that it will reduce competition in the wireless market. Shaw is Canada’s No. 4 mobile provider and a player in major cities like Toronto, Calgary and Vancouver.

Staffieri has already offered a partial surrender to antitrust czar Matthew Boswell by agreeing last month to sell most of Shaw’s wireless assets to Quebecor Inc., a Montreal-based cable and wireless firm. It’s not clear whether that will be enough to settle the matter or if Boswell will take the case all the way to Canada’s merger court, known as the Competition Tribunal.

If the latter happens, it might take until the end of 2022 or early 2023 to resolve the deal’s status. “That prospect is increasing in terms of probability,” said Aravinda Galappatthige, a telecom analyst at Canaccord Genuity.

Still, even with the deal likely to be extended past the July 31 deadline and drag into the fall, it’s possible it will still get approval. Competition lawyer Mark Warner says Boswell has an incentive to settle the antitrust complaint because his legal case is weak.

“The challenge Matthew has is the bureau doesn’t have a great track record in the courts and the tribunal,” said Warner, who runs MAAW Law, which specializes in regulatory and trade law out of offices in Toronto and New York.

In an odd way, the customer-service disaster might even strengthen the Rogers case, buttressing the company’s argument that it needs to be bigger to afford large-scale investments in better networks, Warner said.

Galappatthige said he doesn’t think the network problem will sway the government’s decision on the acquisition. Since Rogers cut the side deal with Quebecor, stripping out the bulk of Shaw’s wireless assets, the transaction has essentially become a merger of firms that provide cable television and internet service in different regions of Canada. There’s little sign the government truly objects to that, he said.

In fact, there may be a political incentive for the industry minister to eventually say yes to Rogers and Shaw because the divestiture has to the potential to make Quebecor much stronger, Warner said, and that company is based in Champagne’s political home.

“Mr. Champagne wants to be Prime Minister Champagne,” he said, “and he comes from Quebec.”