Regulators speak on Rogers-Shaw $26B deal

Canada’s telecommunications sector could shell out $26 billion (US$20.7 billion) by 2025 to roll out 5G mobile service, Natale said in an interview. Rogers, as the country’s largest provider, will shoulder a large share of that cost, including billions for wireless spectrum licenses.

“That’s an incredible number,” said Natale, who has been Rogers’ chief executive officer for four years. “I would challenge most industries in Canada to lay down a number that is that large, in terms of investing in the future prosperity of Canada.” 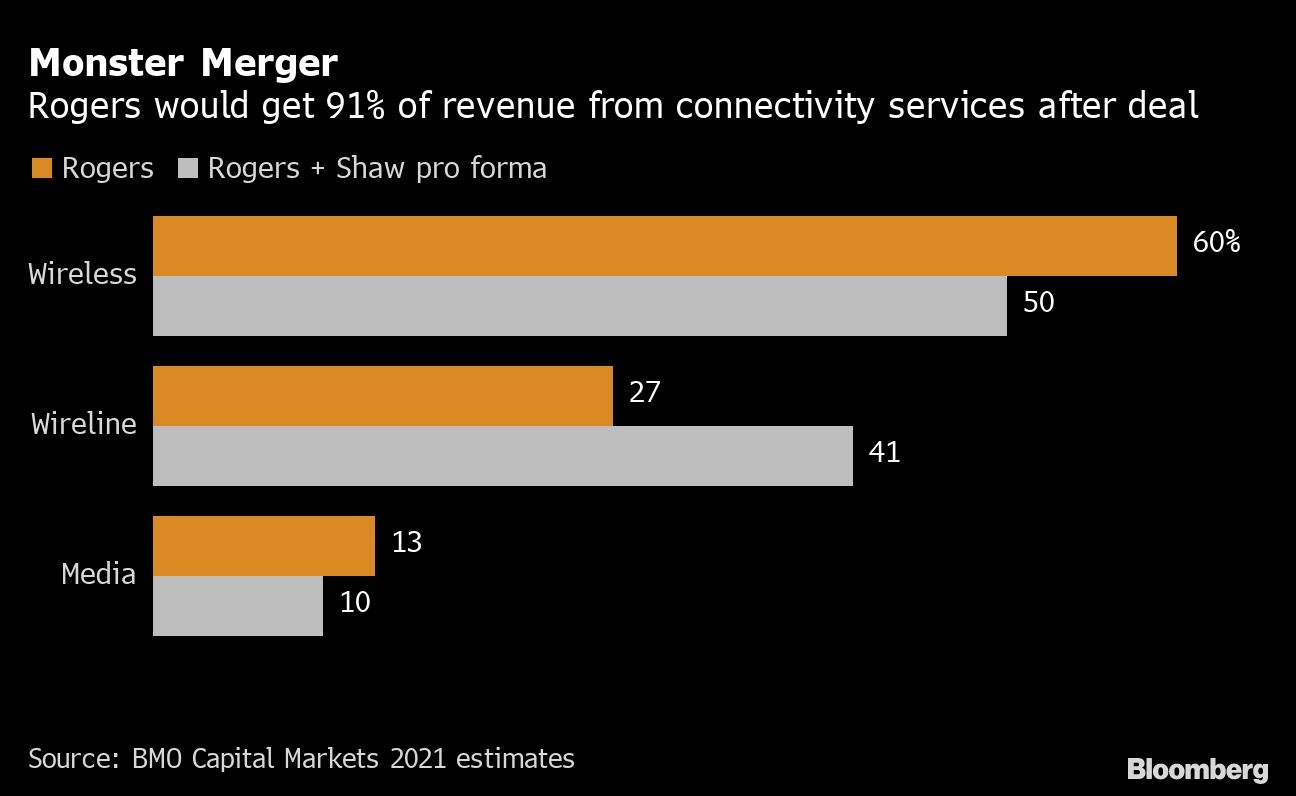 Natale’s words aren’t directed at the market but at the policy makers in Ottawa who control the fate of the US$16 billion Shaw takeover -- a deal that would merge the largest cable providers in Canada’s east and west into a national force.

The transaction faces a long review by Canada’s antitrust body and also needs the approval of the federal government. It’s not expected to close until the first half of 2022, which is one reason Shaw’s stock price remains about 10 per cent below the $40.50 per share takeover bid.

For Natale, the deal faces two potential problems. One is that high wireless costs are a political issue in Canada -- so much so that Prime Minister Justin Trudeau promised before the 2019 election to force wireless bills down by 25 per cent. Trudeau is expected to trigger another election within weeks, hoping to strengthen his grip on power with a majority win.

The other is that the deal would see Rogers swallow Shaw’s Freedom Mobile division, which provides competition -- and lower-cost wireless plans -- in several major cities, including Toronto and Vancouver. In parts of Canada, consumers would be left with three players to pick from, rather than four, when choosing a mobile provider.

“I can say every time I’ve been talking to telecom executives, I always remind them that affordability is what is on my mind,” Industry Minister Francois-Philippe Champagne said in an interview this week.

“How do you achieve affordability? It’s through competition,” he said.

But in Natale’s view, the debate needs to focus on what it takes to fund networks in a country that has fewer people than California but a larger land mass than the entire U.S. He’s promising that some of Rogers’ billions in capital spending will go to improving connections in remote areas that lack good service today.

The high cost of 5G “requires an environment with large players with strong balance sheets that can invest,” Natale said. “One thing COVID has taught us: It’s unacceptable to have 2 million homes in Canada that don’t have high-speed internet.”

Natale’s emphasis on capital spending may have caught some investors off guard. Rogers shares are on pace for their worst weekly drop since January after the company reported a mixed outlook for the third quarter.

The results of a 3,500 MHz spectrum auction, expected any day, are also hanging over the company and its major rivals, BCE Inc. and Telus Corp. The Globe and Mail reported last week that the auction is expected to raise C$8 billion, more than analysts anticipated.

“It would not be surprising to us if Rogers was one of the big spenders,” BMO Capital Markets analyst Tim Casey said in a report Wednesday, in which he doubled his estimate of Rogers’ spectrum costs to $2.5 billion.

Most analysts believe the Shaw takeover will get done, but with modifications. Some expect regulators will force the merged company to divest Freedom Mobile, which has about 2 million wireless subscribers compared to 11 million for Rogers, to preserve an alternative to the big three companies.

“We’re committed to getting the deal done and we’re committed to sitting down with the regulatory bodies to figure out what is the best path forward,” Natale said. “We believe this deal will get done.”