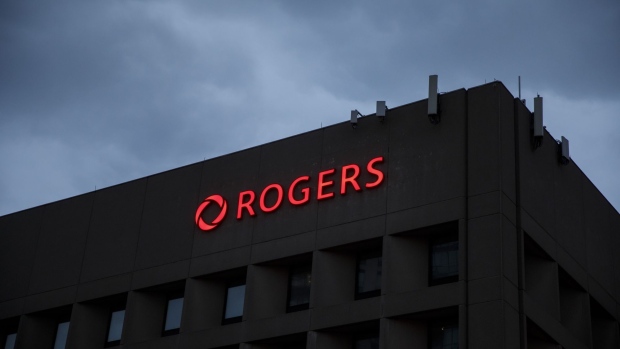 Rogers headquarters in Toronto, Ontario, Canada, on Friday, Oct. 22, 2021. Edward Rogers defeated an effort to limit his voting power at Rogers Communications Inc., paving the way for his extraordinary attempt to replace five directors on the company’s board with his allies. , Bloomberg

(Bloomberg) -- The chairman of Rogers Communications Inc. said the board never voted to oust the company’s chief executive officer, accusing family scion Edward Rogers of falsehoods and a pattern of meddling at the Canadian telecommunications giant.

In an affidavit filed late Friday, John MacDonald contested Edward Rogers’s claims that the board and his family members had voted last month 10-1 to terminate CEO Joe Natale, accusing him of multiple statements that were “untrue.”

The board had believed Natale had “exceeded his goals” and harbored misgivings about Edward Rogers’s pick to replace him -- Tony Staffieri, the company’s chief financial officer at the time.

“It was far from clear that Mr. Staffieri would be the person best suited for the position if Mr. Natale were to leave,” said MacDonald, who replaced Edward Rogers as the company’s chairman last week.

The attempt to replace Natale with Staffieri ignited an unprecedented boardroom showdown that has fractured one of Canada’s wealthiest families and created confusion about who is in charge of Rogers Communications, even as the company navigates a pending $16 billion takeover of rival Shaw Communications Inc.

On Sept. 19, Edward Rogers -- who heads the family trust which controls about 97% of the company’s voting shares -- sidestepped the board and fired Natale, MacDonald said. He presented the CEO’s departure as a fait accompli and misled MacDonald into believing the family supported the move, according to the filing.

When the board met later that week, it approved Natale’s exit package -- not his departure because it had never been given an opportunity to weigh in on that decision, MacDonald said.

“To be clear: at no time did I, or the other members of the Director Group, approve the termination of Mr. Natale’s employment,” MacDonald said. “That had already been done by Edward.”

Several times in recent weeks, MacDonald and other independent directors proposed resigning over their concerns with Edward Rogers’s conduct, he said.

Natale’s ouster was blocked by Edward Rogers’s mother, Loretta Rogers, his two sisters, Melinda Rogers-Hixon and Martha Rogers, and five independent directors. They also stripped the scion of his role as chairman and fired Staffieri. Edward Rogers responded with an effort to reinstate him as chair and replace the five directors with his allies.

The sequence of events has led to one of the most unusual situations in Canadian corporate history: a multi-billion-dollar public company with two chairmen and two boards, and it’s unclear who is in control more than a week after the events unfolded.

On Tuesday, the stock fell to a near eight-month low, and ended the week 4.1% lower, its worst performance in seven weeks.

Edward Rogers has filed a petition asking the Supreme Court of British Columbia to validate his move and seal his power. The case will be heard by a judge in Vancouver starting on Monday.

MacDonald described recent events as “symptomatic of a pattern of behavior that was all too familiar -- Edward’s direct involvement with the chief executive officer, bypassing the board altogether.”

In 2016, Edward Rogers fired the company’s previous CEO, Guy Laurence, and hired Natale without involving the board. At that time, the board’s only role was also to approve the termination package. Similarly, lead director John Clappison resigned in January after Edward Rogers “constantly interfered” in the CEO’s decisions to hire and fire executives, according to the filing.

“Put simply, Edward tried to operate as an executive chairman when the board had specifically provided in the position’s job description that that was not the role,” said MacDonald. “Proper governance cannot simply be ignored when Edward believes it is convenient to do so.”