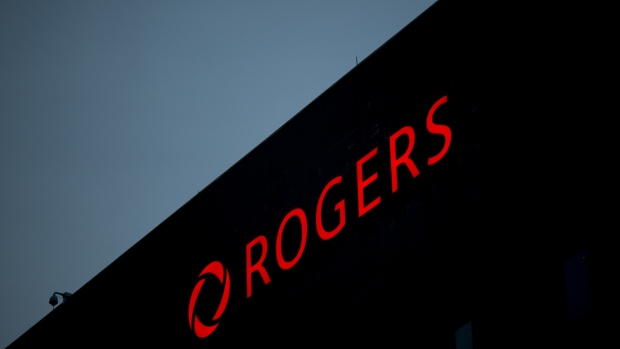 Rogers Communications Inc. signage is illuminated at night on a building in Toronto, Ontario, Canada, on Wednesday, May 17, 2017. Rogers Communications, Canada's largest wireless carrier, is leveraging organic growth in the country's wireless market to expand its subscriber base. Photographer: Brent Lewin/Bloomberg , Bloomberg

(Bloomberg) -- Edward Rogers defeated an effort to limit his voting power at Rogers Communications Inc., paving the way for his extraordinary attempt to eject five directors from the company’s board and replace them with his allies.

During a meeting of the Rogers Control Trust, Edward Rogers’ mother, two of his sisters and Toronto Mayor John Tory tried to pass a motion that would have restricted his ability to use the shares from the trust to vote his directors onto the public company board. But it was blocked by other members of the trust’s 10-person advisory committee on Thursday, according to people familiar with the matter.

The Rogers Control Trust is the private entity that controls Rogers Communications.

It’s a development that suggests Edward Rogers may still have enough support to hold on to the reins of power at Canada’s largest cable and wireless firm, even though he was stripped Thursday of his role as chairman. That support includes longtime Rogers executives and current board members Phil Lind and Alan Horn.

But the company believes Edward Rogers may not be able to replace the five directors through a written shareholder proposal on Friday, as he said he planned to do, the people said. The company believes the former chairman will have to hold a shareholder meeting to do so, potentially dragging out the fight for months, they added.

Edward Rogers’ mother, Loretta Rogers, and two of his sisters, Melinda Rogers-Hixon and Martha Rogers, indicated in a statement that they will continue to fight against their son and brother.

“We are obviously disappointed that Edward has decided to continue to set aside the interests of Rogers employees, shareholders and customers,” said the written statement to Bloomberg News. “Simply put, his actions demonstrate a disregard for good governance and create a grave amount of risk for the company at an especially sensitive time.”  “Most importantly, Edward has miscalculated his legal position. There is no precedent by which he can simply fire five independent Rogers directors and replace them at a whim. The law is clear, and as the company stated today, directors of public companies are removed at meetings of shareholders, convened after proper notice and with full disclosure to all shareholders,” they added.