Rogers Communications Inc. shares fell the most in almost four years after cutting forecasts for revenue and capital spending and as third-quarter earnings missed analysts’ estimates.

The Toronto-based telecommunications company fell 5.6 per cent to $62.68 at 9:58 a.m. trading in Toronto, the biggest intraday decline since Jan. 27, 2016, according to data compiled by Bloomberg. Shares of Rogers’ rivals BCE Inc. Telus Corp. and Shaw Communications Inc. also fell.

Rogers cited accelerated demand for new unlimited mobile data plans for cutting annual forecasts on key financial measures Wednesday in its earnings statement. Revenue for 2019 is now forecast to range between a one-per-cent decrease and a one-per-cent increase, down from previous guidance of a three-per-cent to five-per-cent gain. Capital expenditures are expected to be $2.75 billion to $2.85 billion for the year, from as high as $3.05 billion.

The company also cut its forecasts for adjusted earnings and free cash flow. 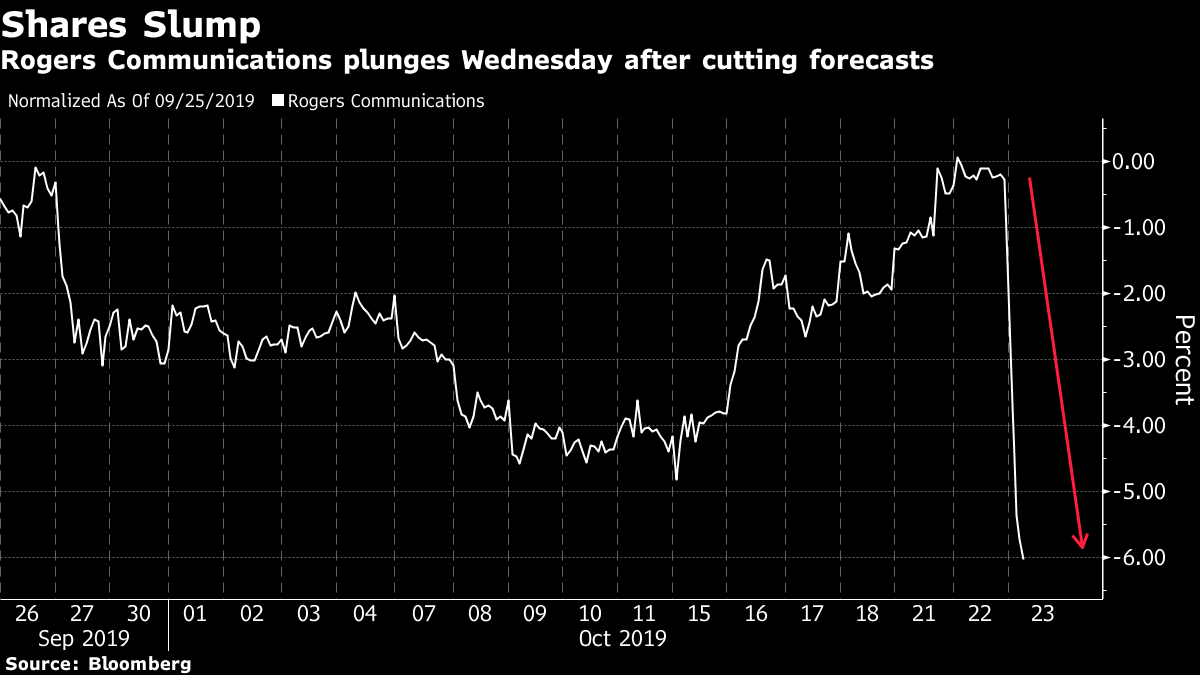 “This impact comes faster and at a greater impact than even we had cautiously expected, and is apt to linger until 2021 as customers continue to migrate to the new plans,” analysts Adam Ilkowitz and Michael Rollins of Citigroup Global Markets said in a note to clients.

“With the vigorous competition among wireless carriers, the cost of wireless data in Canada is already declining significantly,” the association said in an emailed statement. “Today, Canadians in every region of the country can get unlimited data plans starting from $50-$75 a month. This is a significant decline in the price of data from just a year ago.”