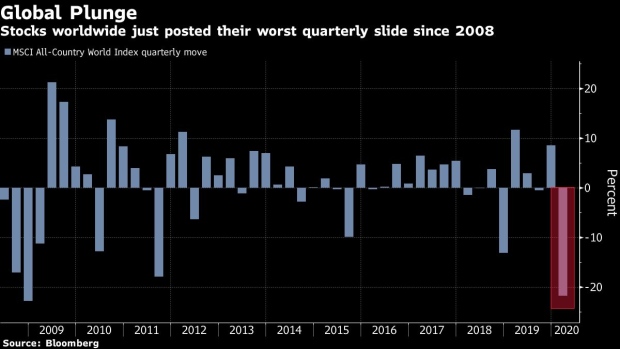 (Bloomberg) -- Equity investors just witnessed the worst quarterly plunge since the financial crisis, and some are seeing more losses ahead.

Jim Rogers, the chairman of Rogers Holdings Inc., says another rout is imminent because of a triple whammy of coronavirus-fulled economic damage, high debt levels and low interest rates that will hurt when they rise. Oaktree Capital Group co-founder Howard Marks sees the range of negative outcomes from the pandemic as much wider than during the global financial crisis. DoubleLine Capital Chief Investment Officer Jeffrey Gundlach says the S&P 500 Index is likely to reach new lows in April, with economic uncertainty further riling investors.

A gauge of global equities sank 22% in the first quarter, the most since 2008, as worries about an all but certain recession swept through markets despite governments worldwide pumping trillions to prop up economies and central banks undertaking emergency interest-rate cuts. Driven by some of the lowest oil prices since the early 2000s, the amount of distressed bonds surged to the highest level since April 2009, quadrupling in less than a week to nearly $1 trillion, according to data compiled by Bloomberg.

Also read: A Lot Riding on Stock Bottom Calls That Worked in a Bull Market

“I think we’re going to get something that resembles that panicky feeling again during the month of April,” Gundlach said Tuesday during a webcast on the market and economic impact of the coronavirus pandemic. “We will get back to a better place, but it’s just not going to bounce back in a V-shape back to January of 2020.”

U.S. equities are likely to follow their counterparts in places like Japan and the emerging markets, which didn’t rebound to highs reached more than a decade ago, he said.

In a note to clients Tuesday, Marks said assets on Friday were priced “fairly” for the optimistic case, but “didn’t give enough scope for the possibility of worsening news.” The most important now is “to be ready to respond to and take advantage of declines.” He pointed to a negative case that encompasses more Covid-19 infections and deaths, job and business losses, and mounting defaults.

Rogers expects “the worst bear market in my lifetime” in the next couple of years, he said in an interview. His concerns have grown as the debt of businesses afflicted by lockdowns and travel bans comes under the the spotlight. The impact of the virus on economies “will not be over quickly because there’s been a lot of damage. A gigantic amount of debt has been added,” he said.

Also read: A Brief History of S&P 500 Bear-Market Rallies and What Follows

Like Rogers, Marks and Gundlach, the fund manager overseeing the fortune of the Lego billionaires says equity markets remain too volatile to justify any bargain hunting.

“This is not the time to be brave,” Soren Thorup Sorensen, who manages an $18 billion portfolio as the chief executive officer of Kirkbi Group, said in an interview on Tuesday. As a long-term investor, the best response is to “sit still and weather the storm,” he added.