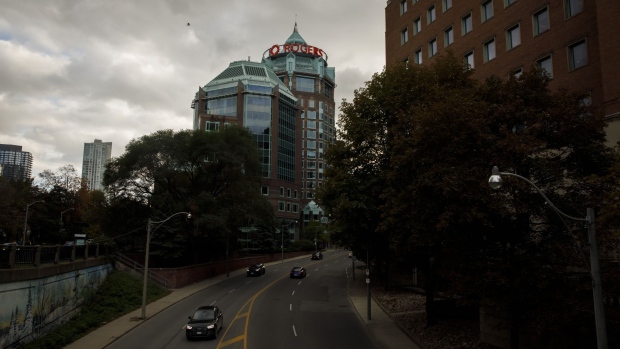 Rogers headquarters in Toronto, Ontario, Canada, on Friday, Oct. 22, 2021. Edward Rogers defeated an effort to limit his voting power at Rogers Communications Inc., paving the way for his extraordinary attempt to replace five directors on the company’s board with his allies. Photographer: Cole Burston/Bloomberg , Bloomberg

(Bloomberg) -- Edward Rogers’ attempt to name himself chairman of Rogers Communications Inc. and replace five of its board members is “unconscionable,” the lawyer representing his sister said.

“I think the concept of a single shareholder being able to replace all the independent directors of one of the largest public companies in the country by a stroke of a pen is unconscionable. I find it quite regrettable,” the lawyer, Walied Soliman of Norton Rose Fulbright, told BNN Bloomberg television on Monday.

Soliman represents Melinda Rogers-Hixon, who’s engaged in a boardroom fight with her brother for control of the company built by their late father.

The vote that named Edward Rogers chairman on Sunday night is now in dispute, with his opponents saying that the meeting was invalid and that John MacDonald is still chairman.

Soliman said he expects that the Supreme Court of British Columbia will “shut this down.”

He also suggested that the family could resolve the matter on its own. “I think ultimately this family, like other families, will resolve this at the kitchen table,” he said.

Asked if Edward Rogers was acting in the interest of shareholders, Soliman called Rogers a “good man who’s trying his best in the way that he sees the world.”

“There’s no animus by Melinda toward her brother,” Soliman continued. “There’s only a difference in perspective on advancing the business. I don’t believe for one second that Edward is an ill-intentioned man. I think that he’s wrong in how he’s approaching this.”