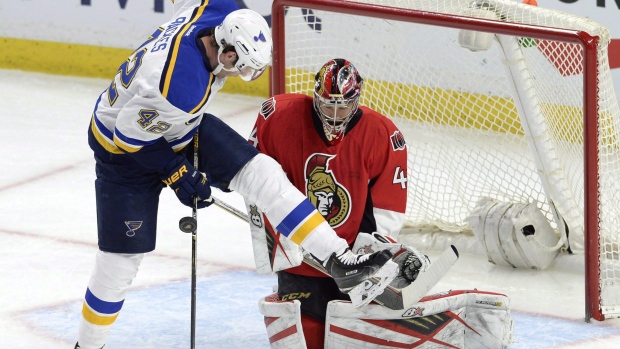 Ottawa Senators goaltender Craig Anderson (41) guards the net as St. Louis Blues' David Backes (42) tries to defect the puck during the first period of an NHL hockey game in Ottawa on March 1, 2016. , The Canadian Press

In September 2014, Rogers Media held a three-day seminar for the staff of its new NHL broadcasts at Toronto’s exclusive Shangri-La Hotel. It was followed by a lavish party at the equally posh Ritz-Carlton.

The emphasis for employees at the glitzy party was the dawn of a new era for staid old Hockey Night In Canada: They would be producing more games on more nights and in a more high-tech manner that would appeal to younger audiences. Ron MacLean, the veteran Hockey Night host, was pushed aside in favour of younger, hipper George Stroumboulopoulos in Rogers’ bid to recoup the record $5.2 billion it agreed to pay the NHL over 12 years for the Canadian national broadcast rights.

But two seasons into the contract, it appears the company overestimated fans’ and sponsors’ appetite for televised hockey. So after a year when postseason ratings were further hurt by the failure of Canada’s seven NHL teams to make the playoffs, Rogers is cutting costs and staff.

Rogers, which confirmed Monday that Stroumboulopoulos is out and MacLean is getting the Hockey Night host job back, cut deeply into its hockey broadcast personnel. Eight broadcasters, including Stroumboulopoulos, lost their jobs; seven were dismissed outright, with the biggest surprise being Glenn Healy, who was the between-the-benches analyst on Hockey Night’s No. 1 crew. Damien Cox was removed as a Hockey Night panelist but was given a radio job as Bob McCown’s co-host on Toronto station Sportsnet The Fan 590’s Prime Time Sports.

The party is over.

“We were at the Ritz-Carlton, it was a crazy party and there was so much hope and excitement,” said one Rogers employee who survived the purge. “Half the people at that party are unemployed today. It’s just brutal.”

P.J. Stock, Billy Jaffe, Chantal Desjardins, Corey Hirsch and Leah Hextall were the other on- air staff to be released. The 5 p.m. NHL Saturday pre-game show on Sportsnet 360 was cancelled. And Sportsnet president Scott Moore said five producers were laid off as well as other behind-the-scenes workers, bringing the total job losses over the last three months to “less than 14.”

However, given the number of job classifications on the hockey broadcasts, from full-time Rogers staff to employees on loan from the CBC to freelancers and contract workers, it is difficult to confirm exactly how many people were affected.

“Two years ago we made some changes to Hockey Night In Canada, we were enthusiastic about the changes, but at end of the day they did not resonate with hardcore hockey fans,” Moore said of Rogers’ about-face and the sacking of Stroumboulopoulos. “Ron [MacLean] is a tremendous host, and bringing him back to the program along with David Amber will resonate with those fans.”

Amber was promoted from reporter to host of the late Saturday games on Hockey Night to allow MacLean to continue as Don Cherry’s sidekick on Coach’s Corner as well as remain host of the Sunday night show, Hometown Hockey. That show requires MacLean to broadcast live from communities across Canada, which involves much travel between Saturday and Sunday.

MacLean said his return came with “mixed emotions” due to the departure of Stroumboulopoulos, who endured heavy criticism on social media and other online forums. “George, for two years, probably put up with a lot. He kept coming and being a great colleague,” MacLean said.

Stroumboulopoulos, who embarked on a motorcycle ride to his home in Los Angeles last week when news of the move slipped out, has not commented. But he made his feelings known yesterday when he changed his Twitter profile picture to one in which he and U.S. broadcaster Keith Olbermann are arm-in-arm. Olbermann lambasted Moore repeatedly on Twitter for dumping Stroumboulopoulos.

Both Stroumboulopoulos and Healy, who each had multiple years left on their contracts, were targets on social media. Moore referenced that criticism in a conference call with reporters when he was asked for specifics on Stroumboulopoulos’s departure.

“That is a tough question but the answer lies with the audience,” Moore said. “He worked extremely hard, but at end of the day we are in the business of listening to our fans. And as much as he appealed to some different demographics, the hardcore hockey fan had trouble accepting that change.”

Healy was gracious about the loss of his job, declining to say much more than it was a great run beginning in 2001 when he was hired for Hockey Night by the CBC.

“I got a chance on Day 1 to work with [play-by-play broadcaster] Don Wittman, an absolute Hall of Famer, and in my last game, I worked with Jim Hughson,” Healy said, adding: “It’s a privilege to do it for how many years I’ve done it.”

Surviving the Hockey Night purge are panelists Elliotte Friedman, Kelly Hrudey and Nick Kypreos. Friedman will also be a regular on the Wednesday night panels with Doug MacLean, and Darren Millard stays as the host. Panelist John Shannon also survived.

The cuts were particularly deep among Rogers’s regional and freelance crews. Desjardins worked on Montreal Canadiens broadcasts, and Hextall appeared on Calgary Flames games. Hextall did manage to find work quickly as she was added to ESPN’s coverage of the World Cup of Hockey in September. Hirsch and Jaffe were freelancers.

Healy’s departure means that Hockey Night will use two-person broadcast crews next season – Hughson, on the No. 1 crew, will remain in the upstairs booth, while Craig Simpson will likely provide analysis from Healy’s old spot between the players’ benches.

Moore said the regional broadcasts for the Vancouver Canucks, Calgary Flames and Edmonton Oilers will no longer have their own pre-game shows. There will be one national pre-game show for all regional games.